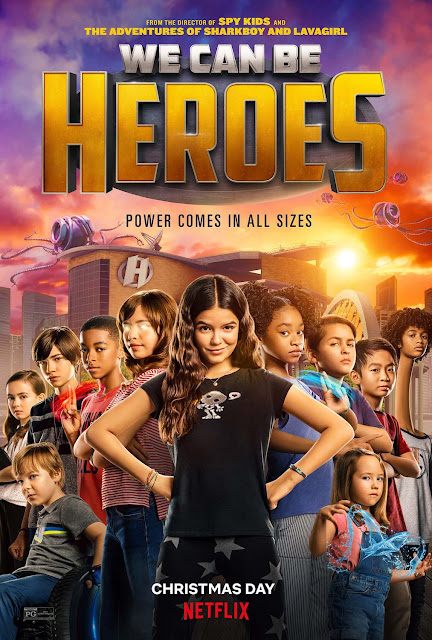 "Power comes in all sizes" in We Can Be Heroes. This superhero film written and directed by Robert Rodriguez. The film serves as a stand-alone sequel to The Adventures of Sharkboy and Lavagirl in 3-D (2005). When alien invaders kidnap Earth's superheroes, their kids are whisked away to a government safe house. But whip-smart tween Missy Moreno will stop at nothing to rescue her superhero dad, Marcus Moreno. Missy teams up with the rest of the superkids to escape their mysterious government babysitter, Ms. Granada. If they're going to save their parents, they'll have to work together by using their individual powers - from elasticity to time control to predicting the future - and form an out-of-this-world team.
By August 2019, Priyanka Chopra Jonas, Pedro Pascal, Adriana Barraza, Boyd Holbrook, Christian Slater, Sung Kang, Christopher McDonald, Taylor Dooley, YaYa Gosselin, Lyon Daniels, Andy Walken, Hala Finley, Lotus Blossom, Dylan Henry Lau, Isaiah Russell-Bailey, Akira Akbar, Nathan Blair and Vivien Blair were cast in a superhero film written and to be directed by Rodriguez and produced by Netflix. At the same time, principal photography commenced and filming took place at Rodriguez's Troublemaker Studios in Austin, Texas. The film was originally scheduled for a January 1, 2021 release date before it was pushed forward to December 25, 2020.
The film stars Chopra Jonas, Pascal, Barraza, Holbrook, Slater, Kang, McDonald, Dooley, Gosselin, Daniels, Walken, Finley, Blossom, Lau, Russell-Bailey, Akbar, Nathan and Vivien Blair. Despite the strong cast, the film is mind-numbingly boring and woodenly acted. Rodriguez was subjecting everyone to their own expensive home movie.
A fun Christmas film for grade school kids, it avoids the subtle meanness and double entendres that filmmakers sometimes insert into films geared to children. Script-wise, the film dutifully harps on the importance of believing in oneself, but it is painfully repetitive and something that is proclaimed more than demonstrated. The film will entertain the youngest viewers but likely erode the good will Rodriguez has built up in the family film genre. The film feels like a whimsical afterthought, a colourful kid-centric lark filled with admirable ideas and nothing to keep older viewers entertained. The film, while noble, imaginative and a huge valentine to family involvement, unfortunately just isn't all that interesting. Sounds like a grand old time -- a hip fusion of Nickelodeon attitude, the wittier children's books, and retro kitsch culture. In fact, it's a nearly unwatchable combination of the worst elements of all three. Youngsters will enjoy it even as they more worldly and cynical elders - anyone over the age of ten - will wish they were someplace else. It's hard to argue that a film won't capture a kid's imagination when it comes from a kid's imagination. But I will argue nonetheless. Looks and sounds and feels as if it were made by kids who'd broken into Dad's toolshed and borrowed his filmmaking toys. Okay, it's simplistic Saturday-morning-cartoon stuff, but it's so cool looking that the younger set will be taken in. Pure Rodriguez creativity, bordering on insanity, but definitely something different. Give him credit. Rodriguez sure knows how to switch gears.
Simon says We Can Be Heroes receives:

Also, see my review for Alita: Battle Angel.
Posted by Simon Shin at 16:00