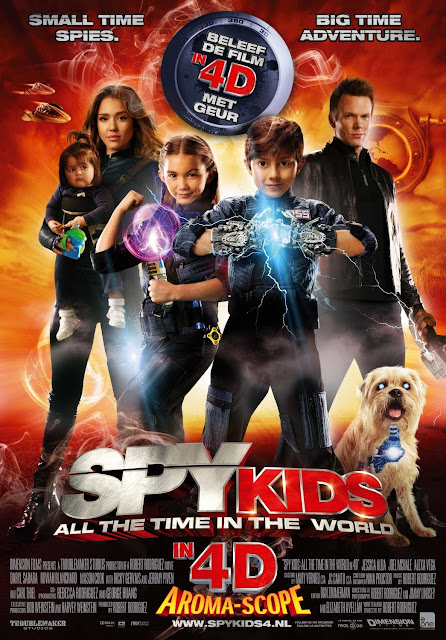 The movie's tagline reads "Saving the world is their idea of family time" and that's all there is to it with Spy Kids: All the Time in the World. This 4D science fiction fantasy action comedy adventure film directed by Robert Rodriguez and it is the fourth installment in the Spy Kids film series. It is a sequel to 2003's Game Over. A retired spy is called back into action, and to bond with her new step-children, she invites them along for the adventure to stop the evil Timekeeper from taking over the world.

Rodriguez was prompted by an incident on the set of Machete (2010) to start envisioning a fourth film in the Spy Kids series. Star Jessica Alba had her then-one year old baby Honor Marie and was dressed to appear on camera when her baby's diaper "exploded". Watching Alba change the diaper while trying not to get anything on her clothes prompted Rodriguez to think "What about a spy mom?" Production on the film was officially announced on September 25, 2009, six years after the release of Spy Kids 3-D: Game Over, by Dimension Films. The script for the film was completed by Rodriguez in December 2009. The title for the film was officially revealed as Spy Kids: All the Time in the World on March 24, 2010 as well as an August 2011 release window, which was later updated to an August 19, 2011 release date. Filming began on October 27, 2010. It is the first of the series that uses "Aroma-scope" that allows people to smell odors and aromas from the film via scratch & sniff cards (reminiscent of the infamous 1960s Smell-O-Vision) last used theatrically in the 2003 animated film Rugrats Go Wild.

All the Time in the World will be found wanting if one is not taken in by the 3-D visuals. The 3-D process will hurt your eyes. It's murky and purple like a window smeared with grape jell-o. However, it helped mask what I deemed as an overall lack of a story. The plot is twig-thin and the parents' absurd adventure in the story makes Rodriguez's continuing theme of family ties seem much less resonant than in the other films. Kids will love it, but adults may find it flat. Watching in 3-D is annoying and watching in 2-D is pointless. Kind of a losing situation. It's a loser in any dimension. As if last one wasn't bad enough, Rodriguez gives us this latest instalment. Where Rodriguez falls short is when he relies on the computer generated special effects to make up for problems in the script. In the end, it's a movie so awful that those headaches spurred by the film's shoddy optics effects seem minor by comparison.

Simon says Spy Kids: All the Time in the World receives: 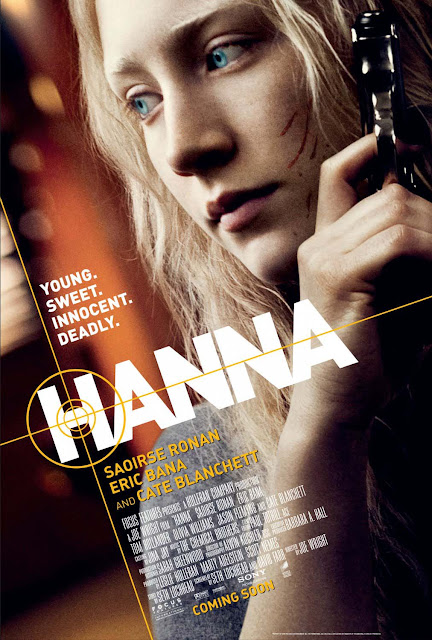 "Young. Sweet. Innocent. Deadly." These all describe Hanna. This action adventure thriller film directed by Joe Wright, and written by Seth Lochhead and David Farr. Hanna is a teenage girl. Uniquely, she has the strength, the stamina, and the skills of a soldier; these come from being raised by her father, an ex-CIA man, in the wilds of Finland. Living a life unlike any other teenager, her upbringing and training have been one and the same, all geared to making her the perfect assassin. The turning point in her adolescence is a sharp one; sent into the world by her father on a mission, Hanna journeys stealthily across Europe while eluding agents dispatched after her by a ruthless intelligence operative with secrets of her own. As she nears her ultimate target, Hanna faces startling revelations about her existence and unexpected questions about her humanity.

Whilst a student at Vancouver Film School, Lochhead wrote a spec script on the idea of a child assassin. In 2006, Lochhead completed the script and shopped it around. The script would go on to be listed in the 2009 Black List, an annual list of the best unproduced screenplays of the year. Saoirse Ronan was attached to star after reading the script. Danny Boyle and Alfonso Cuarón were previously attached to direct the film, before it was confirmed that Wright would direct, after Ronan prompted the producers to consider him. Farr was hired to provide rewrites, before Lochhead was brought back to provides revisions for Wright. By mid March 2010, Eric Bana, Cate Blanchett, Olivia Williams, Jason Flemyng, Tom Hollander, and Michelle Dockery rounded out the film's cast. At the same time, principal photography commenced, and wrapped in mid June. Filming took place at Studio Babelsberg in Berlin, Germany, as well as Hamburg; Kuusamo, Finland; and Ouarzazate and Essaouira, Morocco. Such was the physicality of Ronan's role, her combat tactics called for 4-hour days of intense training under Dan Inosanto (a Bruce Lee protégé) over a two month period at his L.A. gym. Ronan performed many of her own stunts. Wright bleached Ronan's eyebrows to try and mimic the physicality similar to a white wolf.

The film stars Ronan, Bana, Blanchett, Williams, Flemyng, Hollander, and Dockery. Ronan is the best thing about the film; the actress shoulders nearly every scene, and manages to make the taciturn and seemingly affectless Hanna expressive and achingly relatable. The first act confirms only that Ronan is good at punching trees and running through snow while looking vaguely out of breath and being sad.

A gritty reimagining of the assassin archetype, Hanna adds new wrinkles to the genre and texture to the titular assassin — though the film's long-winded journey may try the patience of audiences who want their violent fables concise. In other scenes, that ingenuity gets lost in a mood board of decorative visuals that bloat its running time and hobble its pace. Nonetheless, it's the rare intelligent action thriller that subverts storytelling tropes and surfs on its own ingenuity. 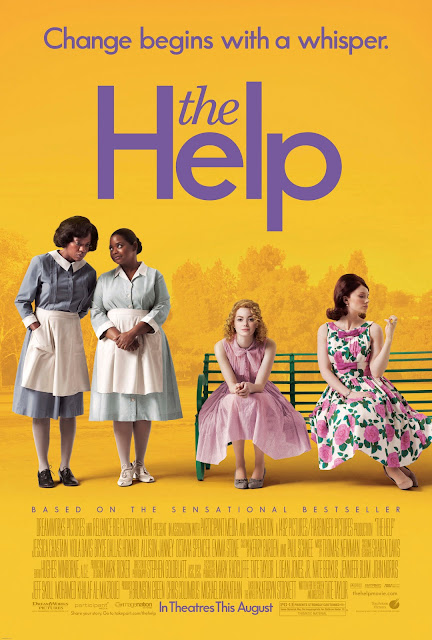 "God says we need to love our enemies. It hard to do. But it can start by telling the truth. No one had ever asked me what it feel like to be me. Once I told the truth about that, I felt free. And I got to thinking about all the people I know. And the things I seen and done. My boy Trelaw always said we gonna have a writer in the family one day. I guess it's gonna be me." This is at the heart of The Help. This period drama film directed and written by Tate Taylor, and adapted from Kathryn Stockett's 2009 novel of the same name. The film is about a young white woman, Eugenia "Skeeter" Phelan, and her relationship with two black maids, Aibileen Clark and Minny Jackson, during the Civil Rights era in 1963 Jackson, Mississippi. Skeeter is a journalist who decides to write a book from the point of view of the maids (referred to as "the help"), exposing the racism they are faced with as they work for white families.

In December 2009, Variety reported that Chris Columbus, Michael Barnathan, and Mark Radcliffe would produce a film adaptation of The Help, under their production company 1492 Pictures. Tate Taylor, who optioned film rights to the book before its publication, was chosen to write and direct the film. The first casting news for the production came in March 2010, was reported that Stone was attached to play the role of Skeeter Phelan. Other actors were since cast, including Davis as Aibileen; Howard as Hilly Holbrook, Janney as Charlotte Phelan and Lowell as Stuart Whitworth. Mike Vogel plays the character Johnny Foote. Octavia Spencer portrays Minny. Filming began in July 2010 and extended through October. The town of Greenwood, Mississippi, was chosen to portray 1960s-era Jackson.

The film stars Viola Davis, Emma Stone, Octavia Spencer, Bryce Dallas Howard, Jessica Chastain, Ahna O'Reilly, Chris Lowell, Sissy Spacek, Mike Vogel, Cicely Tyson, LaChanze, Allison Janney, Mary Steenburgen, and Anna Camp. The cast gave brilliant performances. Vividly portraying the cruelty of white people, with the exception of a few, and the struggle and oppression of African-Americans. Kudos to Davis, Stone, Howard, Spencer and Chastain (the latter two especially). Spencer gave one of the most amazing performances in movie history. As well as for Chastain, for her second major film. These two stars are showing promising futures. Both Oscar-worthy performances for sure.

The Help is a sentimental tale that reveals great emotional truths in American history. It is triumphantly emotional and brave. The film is a plea for respect for African-Americans. It is an incredibly strong stand against the way white people treat African-Americans. It is an excellent film, and it is an attempt to deal with an issue that had been overlooked, and it wouldn't have been done if it hadn't been for Tate Taylor. And it's not like everyone says, that he ruined the book. That's absolutely not the case. Nobody was going to do the book. He made the book live again.