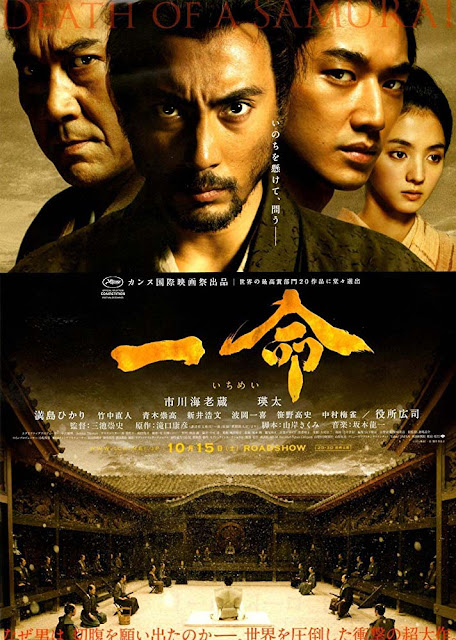 "Love. Honour. Revenge" comes Hara-Kiri: Death of a Samurai (一命). This Japanese 3D drama film directed by Takashi Miike, adapted by Yasuhiko Takiguchi and Kikumi Yamagishi, and it is is a 3D remake of Masaki Kobayashi's 1962 film Harakiri (切腹). The film centres on a samurai who asks permission to commit ritual suicide in the courtyard of a prominent feudal lord and hears the gruesome tale of what happened to a comrade who made a similar request several months earlier.

It being gory is not the best way to deplore wanton bloodshed, Hara-Kiri: Death of a Samurai still looks splendid with its measured tracking shots, its slow zooms, its reflective overhead shots of the courtyard, and its frequent poised immobility. Miike does superb things with architectural compositions, moving forms and occasionally turbulent gyrations of struggling figures in the 3D format. He achieves a sort of visual mesmerization that is suitable to the curious nightmare mood. The beauty of it seems largely due to Miike’s underlying firmness of conception and prevailing spirit, by an unevasive concern for cinematic values. It avoids the sentimentality of some of his earlier films, such as 13 Assassins (2010) through a new emphasis on visual-auditory aesthetics with the cold formality of compositions and Ryuichi Sakamoto's score. But none of Kobayashi's social protests is diminished in the film's construction--it's Mizoguchi-like circularity bitterly denies any hope for human progress. Samurai films, like westerns, need not be familiar genre stories. They can expand to contain stories of ethical challenges and human tragedy. It, one of the best of them, is about an older wandering samurai who takes his time to create an unanswerable dilemma for the elder of a powerful clan. By playing strictly within the rules of Bushido Code which governs the conduct of all samurai, he lures the powerful leader into a situation where sheer naked logic leaves him humiliated before his retainers. It would be wrong for me to reveal the details of the story Tsugumo tells. What I can say is that it is heartbreaking. Both a thrilling character piece and a scathing take down of authority, the film is a tour-de-force and a compelling look into the facade of institutions. It is a masterful chess game, filled with many carefully constructed moves, each arranged to fit in a particular place. It's glorious to behold. It has a steady, hypnotic momentum; Miike wrings as much drama out of facial twitches as he does out of sword fights. The 3D remake uses ploys of the written word in picturing the past and/or far away to criticize the present. Even if Miike's third samurai film is an exemplary tale speaking as much to our own times as to Japan's feudal era, it is also a ripping yarn, keeping the viewer gripped with its jigsaw structure and intense performances. 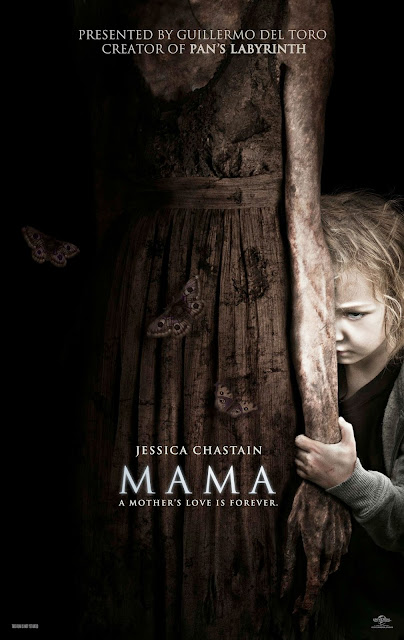 "A mother's love is forever." This is Mama. This supernatural horror film directed and co-written by Andy Muschietti and based on his 2008 Argentine short film Mamá. The film deals with the story of two young girls abandoned in a forest cabin, fostered by an unknown entity that they fondly call "Mama", which eventually follows them to their new suburban home after their uncle retrieves them.

Mama is the twisted creation of Muschietti and his writing & producing partner/sister, Barbara. The 2008 short film caught the attention of executive producer Guillermo del Toro, who immediately wanted to help Muschietti turn it into a feature-length film. Jessica Chastain was the first and only choice for the role of Annabel. After Chastain was officially cast, she took guitar lessons since her character was a bass player. For the title role, Javier Botet was cast due to possessing a genetic disorder called Marfan syndrome. The symptoms of the disease is what gives him his slender body and long fingers. For the make-up process, it took 4 hours every day to get Botet into make-up, and another 2 to remove it. The character of Mama required very little CGI. Botet was able to provide the disturbing and unsettling movements physically, since he possessed well-above-average range of motion in his joints. CGI was only applied to Mama's hair. Mama's appearance was inspired by a painting by Amedeo Modigliani, owned by the director. Production on the film began in October 2011, in Toronto, Ontario at the Pinewood Toronto Studios, and ended in December 2011. Parts of the film were also shot in Quebec City, Quebec. The film was initially scheduled for release in October 2012, but was later rescheduled for January 2013 to avoid competing with Paranormal Activity 4. Its success at that later date has, among with other dump months horror films, convinced studios to start opening horror movies year-round.

The film stars Jessica Chastain, Nikolaj Coster-Waldau, Megan Charpentier, Isabelle Nélisse, Daniel Kash, Jane Moffat, and Javier Botet. The performances given by the cast were confidently portrayed. With Chastain giving an unusual performance that completely works amongst her performances in her body of work.

Andy Muschietti's Mama is a really cool ghost story with an extraordinary human and fairy-tale dimension. Muschietti's elegant pacing and gothic touches imbue the proceedings with a cool mystery. The film augments its abundant creepiness with an equally powerful poignancy. An entertaining and atmospheric love story. What Muschietti provides is the recognition that love exists beyond the most routine of circumstances. That a mother's love is as old as humanity's belief in the fantastic, and just as powerful. Although spooky and poignant, the film becomes weighed down by perhaps one too many cliqué tropes of the genre. But you may find that images from this movie clamber back into your memory weeks after you see it, and give your spine a chill. It's a horror fantasy flick, and a creepily good one, that also functions as an allegory for motherly love. 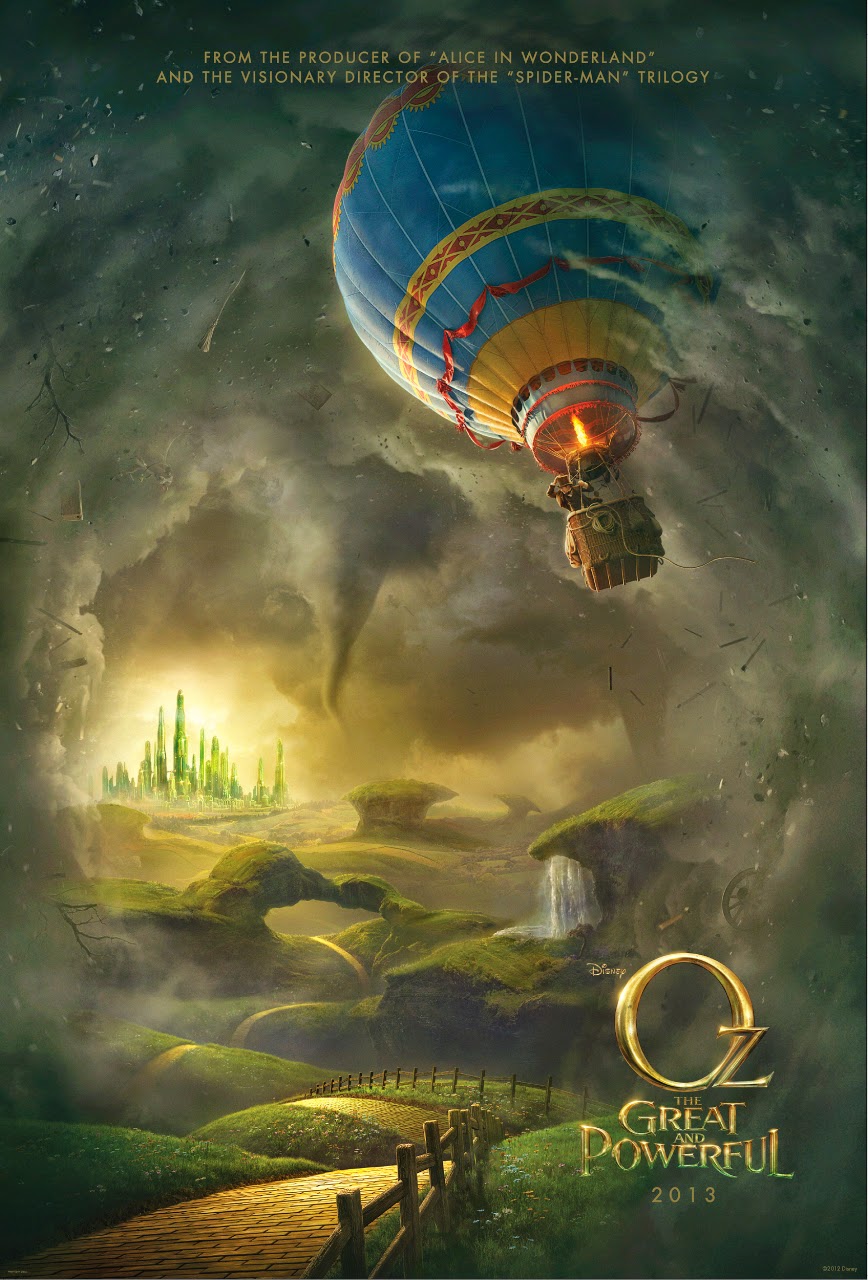 One of the taglines of the film is "The land you know. The story you don't." Which is what Oz the Great and Powerful is all about. This fantasy adventure film directed by Sam Raimi. When a tornado transports magician Oscar "Oz" Diggs from Kansas to the Land of Oz, he is identified as the prophesied "Wizard of Oz" by three witches, Glinda, Evanora and Theodora, who attempt to persuade Oscar to restore order in Oz from a power-hungry Wicked Witch. The film is a spiritual prequel to L. Frank Baum's The Wonderful Wizard of Oz and The Wizard of Oz (1939).

The first signs of life began after the successful release of Snow White and the Seven Dwarfs in 1937, Walt Disney planned to produce an animated film based on the first of L. Frank Baum's Oz books. In 1954, when the film rights to Baum's remaining thirteen Oz books were made available, Walt Disney Productions acquired them for use in Walt Disney's television series Disneyland and the live-action film Rainbow Road to Oz (1957), which was abandoned and never completed. Disney's history with the Oz series continued with Return to Oz (1985), which was presented as an unofficial sequel to, or variant of, the 1939 film. The film was both a critically and commercially failure, but since developed a cult status. The Walt Disney Studios first commissioned Oz the Great and Powerful in 2009 under the tenure of then studio chairman Dick Cook, who was succeeded by Rich Ross and later Alan Horn, a unique trait for a major studio release. Mitchell Kapner and David Lindsay-Abaire were hired to write the screenplay and Joe Roth serving as producer. Roth initially sought out Robert Downey Jr. for the titular role of the Wizard in April 2010. By summer of that year, Sam Raimi was hired to direct the film. In January 2011, Raimi attempted to revive discussions with Downey, but became aware that the actor was uninterested. The film was without a lead until February when James Franco entered final negotiations to star in the film, only five months before filming was scheduled to begin. Franco and Raimi had previously worked together on the Spider-Man trilogy (2002-7). Because Warner Bros. (via Turner Entertainment) owns the rights to iconic elements of the 1939 MGM film, including the ruby slippers worn by Judy Garland, Disney was unable to use them nor any character likenesses from that particular film.

The film stars James Franco as Oscar Diggs, Mila Kunis as Theodora, Rachel Weisz as Evanora and Michelle Williams as Glinda. Franco gave a great performance, Franco in particular hams it up and is often playing to the balcony. Mila Kunis gets a thumbs up for her performance as she demonstrated excellence in the art of bewitchery and emotional drama. Weisz gave a riveting performance. Lastly, Williams gave an amazing performance.

Sam Raimi's Oz the Great and Powerful sacrifices Baum's fantastical spirit and much of its heart. But it's an undeniable visual treat.