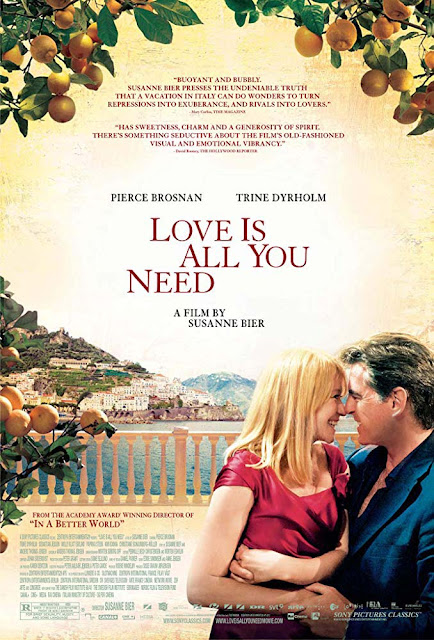 "From the Academy Award winning director of In A Better World" comes Love Is All You Need. This Danish romantic comedy film directed by Susanne Bier, and written by Anders Thomas Jensen. Hairdresser Ida finds her husband cheating on her. Later, she flies to Italy to attend her daughter's wedding where she falls in love with the groom's father.

The film stars Pierce Brosnan, Trine Dyrholm, Kim Bodnia, Paprika Steen, and Bodil Jørgensen. The lead actors outshine a predictable script in this Danish/Italian romantic comedy. However, it's appallingly implausible. Lowlighted by a total lack of chemistry between Thompson and Brosnan. Brosnan and Dyrholm make a charming couple. But their best efforts can't save Jensen's weak script, which Bier also directed, clumsily. Despite Brosnan and Dyrholm's inherent likability and natural chemistry, the two actors end up feeling more like old friends than a sizzling romantic item. Dyrholm and Brosnan really are fine romantic foils. They deserve a better movie to trade barbs in. They deserve better barbs to trade. How to Steal a Million it's not - Brosnan sleepwalks through his dialogue, and there's at least one unforgivable James Bond reference - but the film is too sunny and self-effacing to be truly toxic. Dyrholm is one of those rarities who shines in just about anything. Her crack timing enlivens even her worst lines.

This discordant rom-com comedy has all the charm of a lobotomized poodle; fluffy and without all the necessary faculties to function. It's only the twinkle-eyed self-parody of former Bond Brosnan that makes this dire Danish rom-com remotely watchable. It is an underwhelming and forgettable endeavor that squanders the efforts of its charismatic leads. Unlike its title, this film is not all you need. Alas, there are no sparks. There is no excitement. Hopkins' clumsy script simply bumbles its way past plot holes into predictabilities. Most everything about this movie is predictable within the first few minutes. Seeing the film is a lot like going on a rather pedestrian cruise but having a smashing couple that you look forward to seeing at dinner every night. A romantic comedy as painfully unfunny as a sock in the jaw. The film, which feels like something made back in the late 1960s or early '70s, is so relentlessly silly it's hard to watch without a lot of eye-rolling. Manages to be excruciatingly unfunny despite the presence of Brosnan and Dyrholm in the lead roles. Neither the Brosnan charm nor the Dyrholm pedigree can save a movie that's embarrassing to all involved. The jokes are as creaky as the aching bunions and bad backs onscreen, but Dyrholm and Brosnan are incandescent together. If you like comfy slacks and mildly amusing sitcoms, you're in for a ball. I found the ending cheery - mainly because I got to leave. This is a broad, old school comedy: imagine Mrs Brown's Boys without the swearing. Or Brendan O'Carroll. Or the jokes. Utterly joyless - although you can somehow imagine Nigel Farage enjoying it immensely.

Simon says Love Is All You Need receives: "Far over the misty mountains cold / To dungeons deep and caverns old / The pines were roaring on the height / The winds were moaning in the night / The fire was red, it flame spread / The trees like torches blazed with light..." This famous passage conveys exactly what is going down in The Hobbit: An Unexpected Journey. This epic fantasy film directed by Sir Peter Jackson. It is the first of a three-part film adaptation of the 1937 novel The Hobbit by J. R. R. Tolkien. Set sixty years before The Lord of the Rings, the story is about the hobbit Bilbo Baggins, who is swept into a quest and hired by the wizard Gandalf to accompany thirteen dwarves led by Thorin Oakenshield on a quest across Middle-earth to reclaim the Lonely Mountain from Smaug the dragon.

On 16 December 2007, New Line and MGM announced that Jackson would be executive producer of The Hobbit and its sequel. In April 2008, Guillermo del Toro (Pan's Labyrinth (2006)) was hired to direct the film. Pre-production began around August 2008. Filming was expected to take place throughout 2010 in New Zealand. Jackson revealed in late November 2009 that he anticipated that the script for The Hobbit would not be finished until the beginning of 2010. The announcement created doubts about whether the film would make its previously-announced release dates of December 2011 and December 2012. Jackson reiterated that no casting decisions had been made. On 22 January 2010, Alan Horn said the first film would likely not be released until the fourth quarter of 2012. In 2010, del Toro left the project because of ongoing delays. On 25 June 2010, Jackson was reported to be in negotiations to direct the two-part film. On 15 October 2010, New Line Cinema and Warner Bros. confirmed that The Hobbit was to proceed filming with Jackson as director, with the film reported to be greenlit, and principal photography to begin in February 2011.

The performances in this film felt rather weak and underdeveloped unlike the previous performances were in The Lord of the Rings. Freeman’s performance got off to a rather bad start. But it was the same for Elijah Wood. The performances of the company of dwarves, that included; Richard Armitage as Thorin Oakenshield, Graham McTavish as Dwalin, Ken Stott as Balin, Aidan Turner as Kíli, Dean O'Gorman as Fíli, Mark Hadlow as Dori, Jed Brophy as Nori, Adam Brown as Ori, John Callen as Óin, Peter Hambleton as Glóin, William Kircher as Bifur, James Nesbitt as Bofur, Stephen Hunter as Bombur, were all rather cartoonish than real characters. However, there some strong performances from Sir Ian McKellen, Cate Blanchett, Hugo Weaving, Sir Christopher Lee, Ian Holm and Elijah Wood reprising their roles from the previous films. And lastly Andy Serkis, whose riddling return as Gollum stole the entire film.

Jackson needs to improve on the plot and character development, because The Hobbit: An Unexpected Journey feels kind of flat. However there's plenty of eye candy to behold.