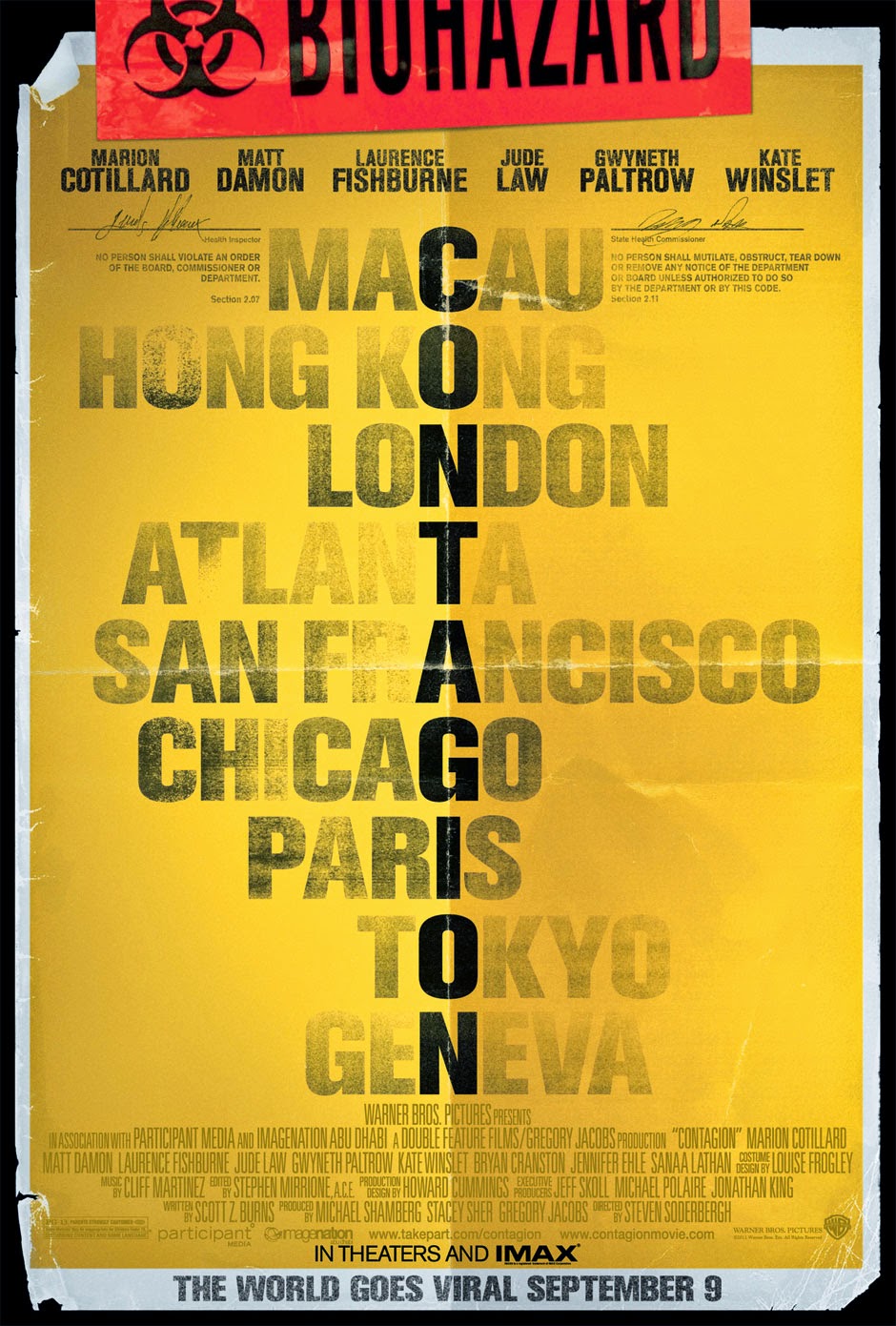 The film’s taglines such as "The world goes viral September 9" and "Nothing spreads like fear" sums perfectly what Contagion brings to a theatre near you. This Medical Disaster Thriller directed by Steven Soderbergh. Contagion follows the rapid progress of a lethal indirect contact transmission virus (Fomite Transmission) that kills within days. As the fast-moving pandemic grows, the worldwide medical community races to find a cure and control the panic that spreads faster than does the virus itself. As the virus spreads around the world, ordinary people struggle to survive in a society coming apart.

T. S. Elliot once wrote, "This is the way the world ends: not with a bang but a whimper," Soderbergh was motivated to make an "ultra-realistic" film about the public health and scientific response to a pandemic. The movie touches on a variety of themes, including the factors which drive mass panic and loss of social order, the scientific process for characterizing and containing a novel pathogen, balancing personal motives against professional responsibilities and rules in the face of an existential threat, the limitations and consequences of public health responses, and the pervasiveness of interpersonal connections which can serve as vectors to spread disease. Soderbergh acknowledged the salience of these post-apocalyptic themes is heightened by reactions to the September 11 attacks and Hurricane Katrina. As filmmakers J. J. Abrams and Matt Reeves acknowledged the September 11 attacks in their disaster film Cloverfield (2008), where the film's central monstrous antagonist personified the September 11 attacks itself. The movie was intended to realistically convey the "intense" and "unnerving" social and scientific reactions to a pandemic.

Like an Irwin Allen disaster flick (The Poseidon Adventure (1972) and The Towering Inferno (1974)), the film featured an A-list ensemble cast that included Marion Cotillard, Matt Damon, Laurence Fishburne, Jude Law, Gwyneth Paltrow, Kate Winslet, and Bryan Cranston. Despite the cast giving strong performances, it was an engaging or even relatable. My good friend and colleague, Kelly Ryu, once told me that the film would have been more realistic if Soderbergh cast unknowns rather than well recognizable actors for the roles. Then the whole film would been more realistic, more terrifying, more well received and the film would have catapulted the unknowns to stardom. A film that did this so well was, once again, the monster-disaster epic Cloverfield, which all starred unknowns.

Contagion is splendid entertainment that will get you worried about whether they'll be able to contain that strange virus. The movie's craft makes the dread of a killer virus contagious: viewers may feel they have come down with a case of secondhand SARS or sympathetic monkeypox. Heedlessly derivative though it may be, the film what it sets out to do and then some -- scare us out of our wits, then get us to apply those wits to an uncommonly intelligent and provocative disaster flick. What also makes it effective, and sets it apart from other thrillers, is that it makes you care about the characters. 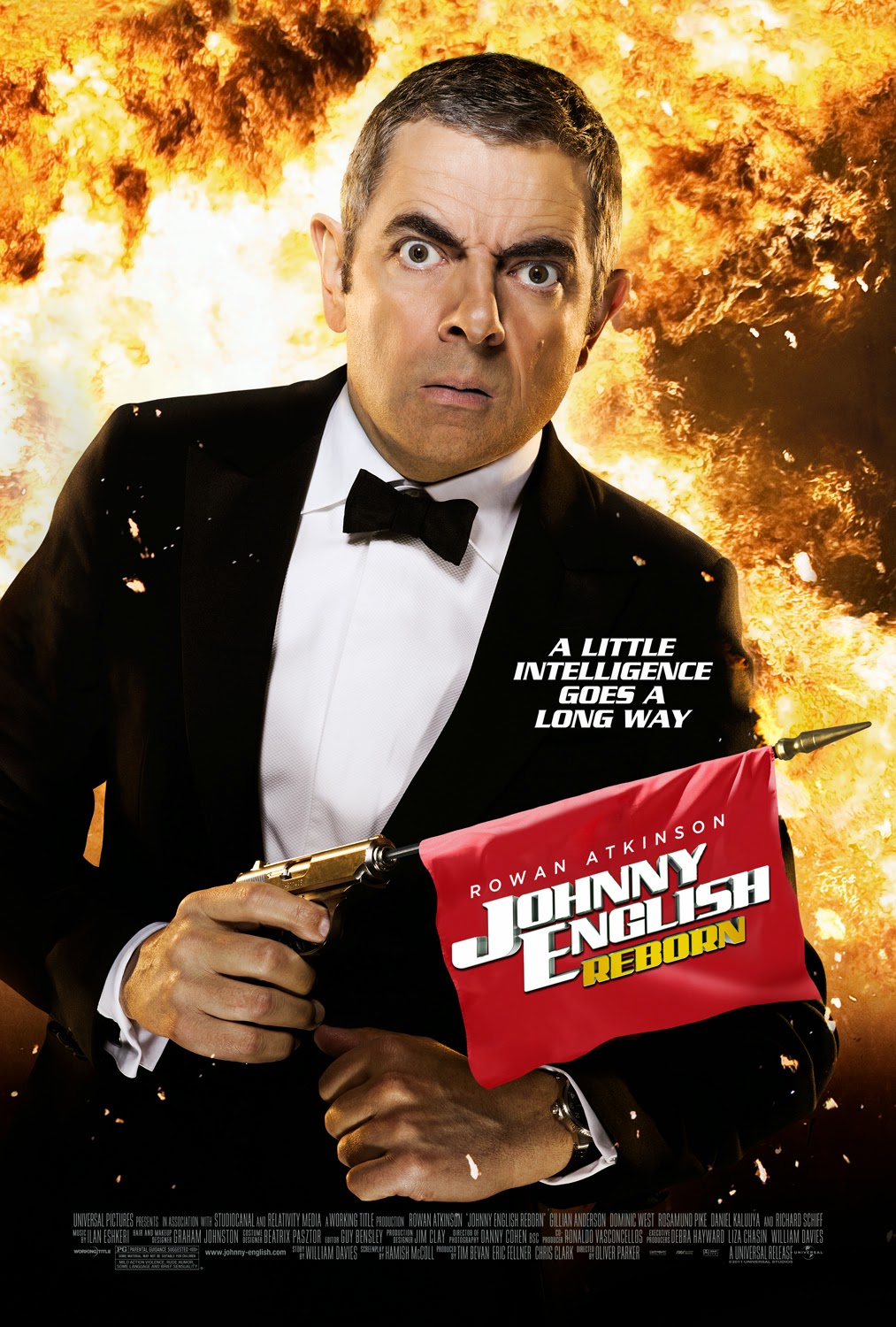 "'Johnny English. Five years ago he was our top agent.' 'Yeah. Took his eye off the ball in Mozambique.' 'Does it have to be him?' 'He's the only one our contact will talk to.' 'So where is he?'" Which is someone we didn’t expect to return, but he has in Johnny English: Reborn. This British Spy Comedy parody directed by Oliver Parker. The film is the sequel to Johnny English (2003). Five years after the previous film, Johnny English is called back to MI7 to undercover a group of international assassins known as 'Vortex', before they kill the Chinese premier and cause global chaos. However he is not alone. He is aided by his 'rookie' sidekick Tucker and his new love interest Kate Summers, MI7's behavioural psychologist.

The film stars Rowan Atkinson, reprising his role as the title character. As well as Rosamund Pike as Kate Sumner, MI7's behavioural psychologist and English's love interest, Daniel Kaluuya as Agent Colin Tucker, English's smart, youthful sidekick, Gillian Anderson as MI7 Head Pamela Thornton, codenamed as Pegasus, the new boss at MI7, and Dominic West as Simon Ambrose, the main antagonist. The cast may not have given the best performances but it was performances that were hilarious. Atkinson gave another hilarious performance after many other iconic performances such as Blackadder and Mr. Bean. Despite the jokes not being as fresh as his other comedies nor the first film. Atkinson's performance also reminded me of Don Adams' performance on the hit comedy TV series of Get Smart and Peter Sellers' bumbling character of Inspector Jacques Clouseau in The Pink Panther films. Pike gave a subtle performance as English’s love interest, however I felt that her chemistry with Atkinson did not spark. Kaluuya, like Atkinson, also gave a hilarious performance who always seems to correct Atkinson most of the time. Which compliments Atkinson’s performance. Anderson gave a more contrasted performance to Atkinson, despite leaving behind moments of very dry humor. West gave a suave performance as the film’s antagonist, however no matter how smooth he operates, he proved no real threat to Atkinson nor to the audience. By far, one of the least threatening villains ever.

Johnny English: Reborn is, like its predecessor, a tame spy spoof that elicits infrequent chuckles. A funny summer frolic. However, it doesn't so much try to send up other spy films as it tries to one-up its own predecessor in this second go-round. By the end, Spy recycles its own gags, not just ones from the first movie. It’s a rehash of the same story with new cast members and new takes on familiar jokes. While it lives up to the very definition of 'hit and miss', the parts that hit are very funny. You won't die laughing in the theater, but the filmmakers aren't asking you to, as they do in the frantic, adolescent comedies that dominate the market. It's a pleasure. 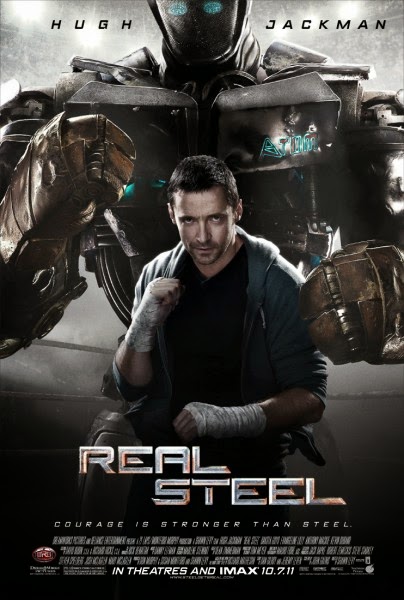 "Champions aren't born. They're made" in Real Steel. This Science Fiction film directed by Shawn Levy, adapted by John Gatins and based on the 1956 short story Steel by Richard Matheson. In the near future, robot boxing is a top sport. A struggling ex-boxer feels he's found a champion in a discarded robot.
Between 2003 and 2005, Dan Gilroy penned an adaptation of Matheson's 1956 short story and was purchased by DreamWorks for $850,000. The project was one of seventeen that DreamWorks took from Paramount Pictures when they split in 2008. Peter Berg was initially interested in directing the film, but it never materialised. Ultimately, in September 2009, Levy was hired to direct. In November, Hugh Jackman was attached to star. Additionally, Les Bohem and Jeremy Leven reworked Gilroy's screenplay, but Gatins worked on a new draft. Levy worked with Gatins to revise the script, spending a total of six weeks fine-tuning the script. By mid June 2010, Evangeline Lilly, Anthony Mackie, Karl Yune, Kevin Durand, James Rebhorn and Dakota Goyo rounded out the film's cast. At the same time, with a budget of $110 million, principal photography commenced and wrapped in late September. Filming took place throughout Michigan, USA. The animatronic robots were created by Legacy Effects, and the visual effects were provided by Industrial Light & Magic. For certain shots with animatronics, they were controlled by more than twenty puppeteers. Levy opted to have more practical effects and puppeteering of the robots at the behest of executive producer Steven Spielberg. Boxing hall-of-famer Sugar Ray Leonard served as an advisor and gave Jackman boxing lessons so his moves would be more natural. Disney originally scheduled the film for a November 18, 2011 release date, but it was moved to October 7, 2011 to avoid competition with The Twilight Saga: Breaking Dawn - Part I.
The film stars Jackman, Lilly, Mackie, Yune, Durand, Rebhorn and Dakota Goyo. The castgave terrific performances. Jackman was outstanding as the charisma driven, stubborn Charlie Kenton. Goyo had a magical quality which made him the film's central heart and made him get as much or more spotlight than his co-star as Max Kenton. Finally Lilly was fantastic as the kind, compassionate voice of reson and love interest for Jackman’s Charlie. Lilly and Jackman had a near perfect relationship and chemistry that made me believe that these two characters had been friends for a long time.

Real Steel, though innovative with its stunning robot fight scenes, is nothing more than pure 2000s make believe. The film’s plot is gimmicky, heavy-handed and cliché, all because of the direction of Shawn Levy, the man responsible for bringing us some of the most tawdry movies of recent years, such as the ridiculously awful Cheaper by the Dozen (2003) and The Pink Panther (2006). He has an instinct for making serious emotions look tawdry. While the film may look good now, but it will fade like every other one of his movies and every "Hollywood" movies ever made. 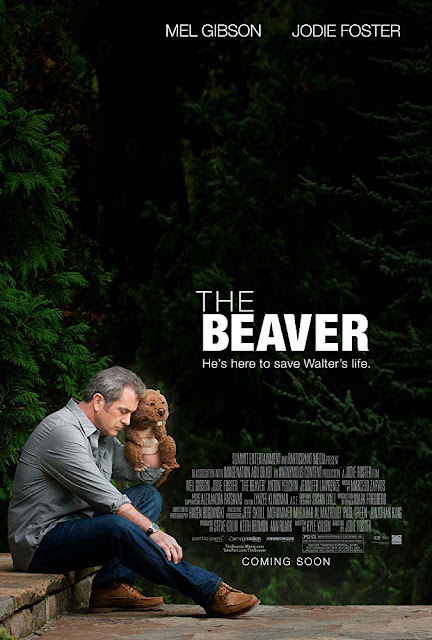 "He's here to save Walter's life." He is The Beaver. This comedy-drama film directed by Jodie Foster and written by Kyle Killen. The film centres on Walter Black, the head of a failing toy company, who is deeply depressed. His marriage to Meredith is broken and his oldest son, Porter, hates him. When Meredith finally throws him out of the house, Walter begins his final tailspin. Drunk and alone, Walter is about to commit suicide -- but is saved by the voice of the beaver puppet he found in a dumpster. Wearing the puppet on his hand, Walter speaks only through it and tries to get his life on track.

The screenplay was featured in the 2008 Blacklist; a list of the "most liked" unmade scripts of the year. Steve Carell and Jim Carrey were both signed on to star at different stages of production, before Mel Gibson was cast. However, before the film was set for a May 6, 2011 release date, the project was shelved due to Gibson's alleged assault against his ex-girlfriend, Oksana Grigorieva. By late September 2009, Foster, Anton Yelchin, Jennifer Lawrence, and Cherry Jones. At the same time, with a budget of $21 million, principal photography commenced, and wrapped in early December. Filming took place in Westchester County and New York City, New York. The film was shot in the 2.35:1 aspect ratio, the first for Foster.

The film stars Gibson, Foster, Yelchin, Lawrence, and Jones. Quirky, yet solid, performances were given by the cast, especially from Gibson. Gibson gave the craziest performance of his entire career, crazier then Max Rockatansky and Martin Riggs put together. His performance, if gone any crazier, could have bordered into the same arena as his animated caricature on South Park. Meanwhile, Foster, on top of directing, and Yelchin provide a solid performance as the loving wife and son baring witness to Gibson's decent into madness. Lawrence also provides a solid performance and great chemistry with Yelchin.

The Beaver is the kind of movie you could enjoy watching; it's about interesting person finding out about himself and as Foster creates this deranged man who learns to see a lot and know a lot but is only gradually beginning to understand a lot, we can hear echoes, perhaps, of a young girl who once found it more interesting to study French than get her picture in the fan magazines. Despite quirky, fresh moments and a watchful, touching performance from Gibson, the movie lurches unsteadily from scene to scene, punctuated by odd bursts of irrelevant melodrama and culminating in a film that is frankly quite baffling. Well meaning but too simplistic and earnest comedic drama that juxtaposes two types philosophies of how to help a depressed and deranged man. In addition, the film tries to jerk tears but instead elicits giggles. Nonetheless, it is a triumphant sophomore effort as a film director for Foster in a captivating tale. Foster displays a great touch in her sophomore directorial effort.