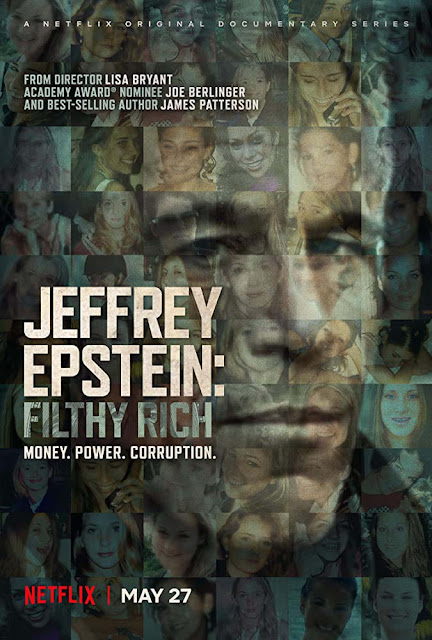 "Money. Power. Corruption." This is Jeffrey Epstein: Filthy Rich. This documentary miniseries directed by Lisa Bryant, written by John Connolly and Tim Malloy, and based on the 2016 book of the same name by James Patterson. Leading up to his 2019 arrest, mysterious tycoon Jeffrey Epstein was accused of abusing women and underage girls for decades, assembling a network of enablers to help carry out and cover up his crimes. Epstein came from humble beginnings yet managed to lie and manipulate his way to the top of the financial world. He eventually gained tremendous wealth and power while running an international sex trafficking ring. The serial sex abuser made a secret plea deal with the government in 2008 avoiding a potential life sentence and continued to abuse women.

On January 20, 1953, the infamous American financier and sex offender was born. He began his professional life as a teacher but then switched to the banking and finance sector in various roles, working at Bear Stearns before forming his own firm. He developed an elite social circle and procured many women, including underage girls, who were then sexually abused by Epstein and some of his contacts, including Prince Andrew. In 2005, police in Palm Beach, Florida, began investigating Epstein after a parent complained that he had sexually abused her fourteen-year-old daughter. In 2008, Epstein pleaded guilty and was convicted by a Florida state court of procuring an underage girl for prostitution and of soliciting a prostitute. He served almost thirteen months in custody, but with extensive work release. He was convicted of only these two crimes as part of a plea deal; federal officials had in fact identified thirty-six girls, some as young as fourteen years old, whom Epstein had allegedly sexually abused. In early 2019, Epstein was arrested again on federal charges for the sex trafficking of minors in Florida and New York. However, on August 10, 2019, before he was scheduled to appear in court for his trial, he died in his jail cell at the Metropolitan Correctional Center in New York City. The medical examiner ruled the death a suicide, although Epstein's lawyers have disputed the ruling along with huge public scepticism about the true cause of his death. Because his death eliminated the possibility of pursuing criminal charges, a judge dismissed all criminal charges in late August. Epstein had a decades-long association with Ghislaine Maxwell, who has faced persistent allegations of procuring and sexually trafficking underage girls for Epstein. Prior to Epstein's death, the series, based on Patterson's 2016 book Filthy Rich: A Powerful Billionaire, the Sex Scandal that Undid Him, and All the Justice that Money Can Buy: The Shocking True Story of Jeffrey Epstein, was announced.

The series is a fully immersive look into not only Epstein but also the young women he molested, and the life-altering dangers of a justice system that so many people are expected to put their upmost faith in. The only truly relevant talking-head interviews are with the young female victims.

Film Review: "Have a Good Trip: Adventures in Psychedelics" (2020). 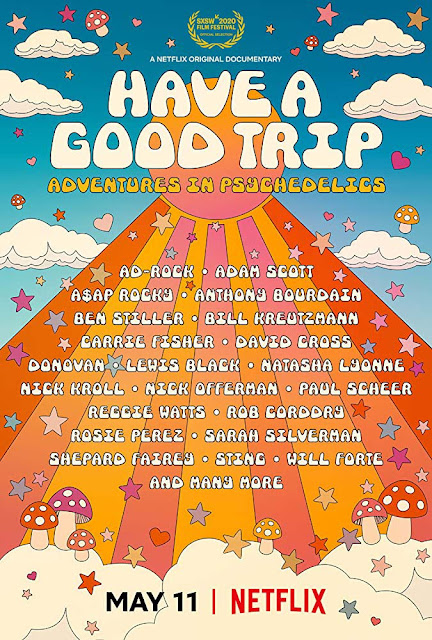 From Netflix comes Have a Good Trip: Adventures in Psychedelics. This documentary film directed by Donick Cary. Explore hallucinogenic highs and lows a celebrities share funny, mind-blowing tales via animations, reenactments and more in this documentary. Mixing comedy with a thorough investigation of psychedelics, the film explores the pros, cons, science, history, future, pop cultural impact, and cosmic possibilities of hallucinogens.

Born on October 22, 1920, American psychologist and writer, Timothy Francis Leary, was born and would go on to become a polarising figure due to his strong advocacy for psychedelic drugs. As a clinical psychologist at Harvard University, Leary worked on the Harvard Psilocybin Project from 1960–62 (LSD and psilocybin were still legal in the United States at the time), resulting in the Concord Prison Experiment and the Marsh Chapel Experiment. Leary believed that LSD showed potential for therapeutic use in psychiatry. He used LSD himself and developed a philosophy of mind expansion and personal truth through LSD. The scientific legitimacy and ethics of his research were questioned by other Harvard faculty because he took psychedelics along with research subjects and pressured students to join in. Leary and his colleague, Richard Alpert (who later became known as Ram Dass), were fired from Harvard University in May 1963. Most people first heard of psychedelics after the Harvard scandal. After leaving Harvard, he continued to publicly promote the use of psychedelic drugs and became a well-known figure of the counterculture of the 1960s. He popularized catchphrases that promoted his philosophy, such as "turn on, tune in, drop out", "set and setting", and "think for yourself and question authority". He also wrote and spoke frequently about transhumanist concepts of space migration, intelligence increase, and life extension (SMI²LE). Leary developed the eight-circuit model of consciousness in his book Exo-Psychology (1977) and gave lectures, occasionally billing himself as a "performing philosopher". Opinions of Leary are polarized, ranging from bold oracle to publicity hound. Allen Ginsberg called Leary "a hero of American consciousness." Where as President Richard Nixon described Leary as "the most dangerous man in America". During the 1960s and 1970s, he was arrested often enough to see the inside of thirty-six prisons worldwide.

The film aims to entertain, not educate, as it presents a star-studded parade of celebrity reminiscences about taking hallucinogenic drugs. Mostly, it succeeds. However, listening to celebrities recount their dreams, these anecdotes primarily give the impression that you had to be there (and in that state of mind) to get it. Although the result is mildly amusing, it emanates the distinctive odor of a project that's funnier for the participants than the viewers. Anyone hoping Cary's film might lead to the wider, weirder history of the subject matter - the CIA, youth culture, so on - will be disappointed. Don't come to the film looking for answers, or even much information about psychedelics. But it is a friendly, entertaining and likeably brief collection of yarns and recollections. If nothing else, the film recenters this weirdness in our current reconception of psychedelia.

Simon says Have a Good Trip: Adventures in Psychedelics receives: 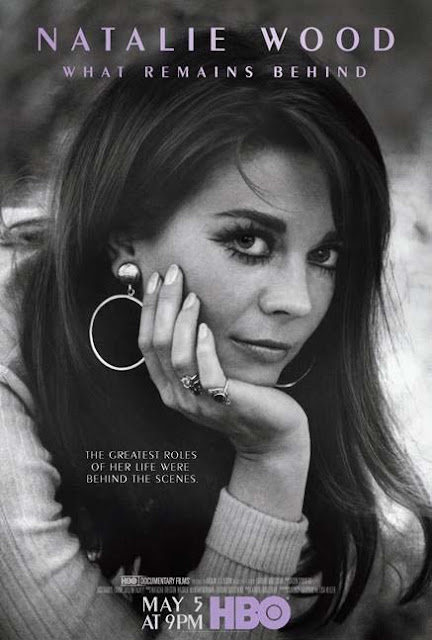 "The greatest roles of her life were behind the scenes." This is Natalie Wood: What Remains Behind. This documentary film directed by Laurent Bouzereau. The film explores Wood’s life and career through the unique perspective of her daughter, Natasha Gregson Wagner, and others who knew her best. The film features previously unseen home movies, photographs, diaries, letters and artifacts, as well as intimate interviews with her friends, family, co-stars and colleagues; re-examining her personal and professional triumphs and challenges, which have often been overshadowed by her tragic death at age forty-three.

On July 20, 1938, Natalie Wood was born Natalia Nikolaevna Zakharenko in San Francisco, California. The Russian-American began acting in films at age four and was given a co-starring role at age eight in Miracle on 34th Street (1947). As a teenager, she earned a nomination for the Academy Award for Best Supporting Actress for her performance in Rebel Without a Cause (1955), followed by a role in John Ford's The Searchers (1956). Wood starred in the musical films West Side Story (1961) and Gypsy (1962), and she received nominations for the Academy Award for Best Actress for her performances in Splendor in the Grass (1961) and Love with the Proper Stranger (1963). Her career continued with films such as Sex and the Single Girl (1964), Inside Daisy Clover (1964), and Bob & Carol & Ted & Alice (1969). During the 1970s, Wood began a hiatus from film and had a child with husband Robert Wagner, whom she had previously married and divorced. Wagner and Wood remarried after she divorced her second husband. She appeared in only three films throughout the decade, but did act in several television productions, including a remake of the film From Here to Eternity (1979) for which she received a Golden Globe Award. Wood's films represented a "coming of age" for her and for Hollywood films in general.

Critics have suggested that her cinematic career represents a portrait of modern American womanhood in transition, as she was one of the few to take both child roles and those of middle-aged characters. On November 29, 1981, at the age of forty-three, Wood drowned off Catalina Island. The events surrounding her death have been explained by conflicting witness statements, prompting the Los Angeles County Sheriff's Department, under the instruction of the coroner's office, to list her cause of death as "drowning and other undetermined factors" in 2012. In 2018, Wagner was named as a person of interest in the ongoing investigation into her death.

A stimulating, entertaining and vast documentary in the exploration of a legendary Hollywood star. As informative and captivating as all the material on display here is, it rushes by far too quickly. This could be seen as a positive: so engrossing is the film that you won't believe how quickly it's over. Natalie Wood: What Remains Behind is, in the end, a compelling examination of Natalie Wood - her on-screen persona, her personal life, and her legacy.

Also, see my review for Five Came Back.
Posted by Simon Shin at 23:00 No comments: 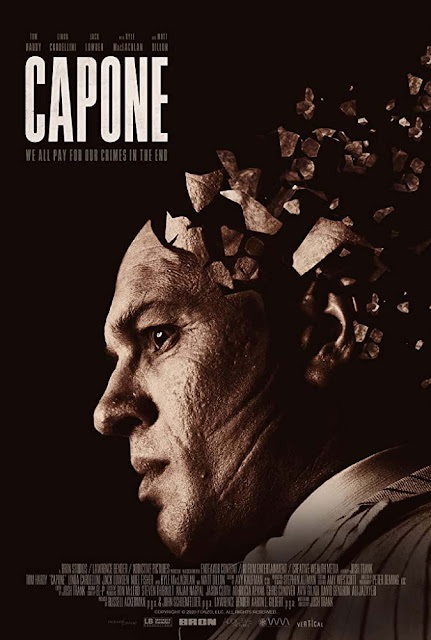 "We all pay for our crimes in the end." This is true for Capone. This biographical film written, directed and edited by Josh Trank. A ruthless businessman and bootlegger who ruled Chicago with an iron fist, Al Capone was the most infamous and feared gangster of American lore. At the age of 47, following nearly a decade of imprisonment, dementia rots Capone’s mind and his past becomes present as harrowing memories of his violent and brutal origins melt into his waking life.

After the critical and commercial failure of Fantastic Four (2015), Trank, in an interview with The New York Times, recalled that he "went from my phone ringing all day and getting emails", after the success of Chronicle (2012), "to just dead silence in a really jarring way. I was left with a lot of confusion, and I felt really numb. I sat still outside, chain-smoking cigarettes for a good two months without speaking to anybody. At some point during my internal meditative state, I started to think about the story I knew from years of reading about Al Capone. I kept thinking about Capone at the end of his life, sitting outside, smoking a cigar, not knowing what’s going on, dying from syphilitic dementia. It was a place that I went to in my head to reconcile with the things that I was feeling." In October 2016, the film, originally entitled Fonzo, was announced with Trank as writer, director and editor and with Tom Hardy to star as the infamous Chicago gangster. Filming was initially eyed to begin in the summer of 2017, with Hardy stating it would be released sometime in 2018. However, in 2017, Hardy instead ended up filming Venom (2018). By March 2018, Hardy announced that Fonzo would be his next project. In addition, Linda Cardellini, Matt Dillon, Kyle MacLachlan, Al Sapienza, Kathrine Narducci, Noel Fisher, and Jack Lowden rounded out the film's cast. At the same time, with a budget of $20.6 million, principal photography commenced, and wrapped in mid May. Filming took place in New Orleans, Louisiana, and was shot in the 2.35:1 aspect ratio. In late April, The Run The Jewels MC/producer El-P was hired to compose the film's score. In mid April 2020, the trailer for the film was released with its new title, Capone. The film was originally intended to have a theatrical release, however it was eventually released on VOD due to the COVID-19 pandemic.

Capone may be a beautifully structured and well-acted movie, but it certainly's isn't an easy film to watch. Still, if you like horror movies, this one will keep you on the edge of your seat, albeit squirming every minute. It is not a fun or particularly upbeat film, but it does grab you by the collar and it sucks you right into the screen.