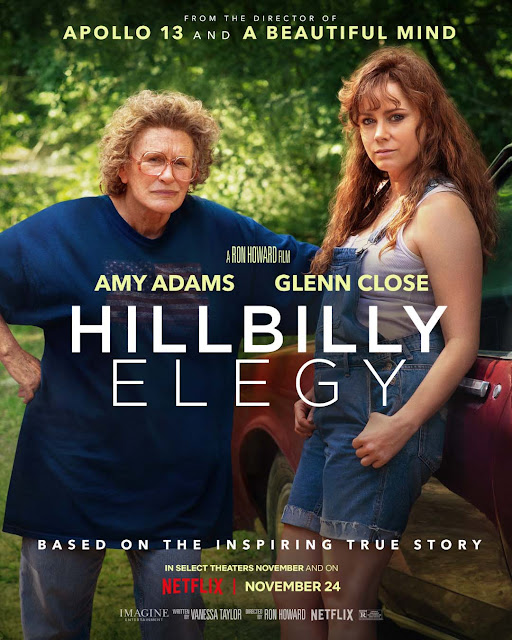 "From the director of Apollo 13 and A Beautiful Mind" comes Hillbilly Elegy. This drama film directed by Ron Howard, written by Vanessa Taylor, and based on the 2016 memoir of the same name written by J.D. Vance. An urgent phone call pulls a Yale Law student back to his Ohio hometown, where he reflects on three generations of family history and his own future.
Published in 2016, Vance's memoir, Hillbilly Elegy: A Memoir of a Family and Culture in Crisis, is about the Appalachian values of his Kentucky family and their relation to the social problems of his hometown of Middletown, Ohio, where his mother's parents moved when they were young. The book was popularized by an interview with the author published by The American Conservative in late July 2016. The volume of requests briefly disabled the website. Halfway through the next month, The New York Times wrote that the title had remained in the top ten Amazon bestsellers since the interview's publication.
In April 2017, Imagine Entertainment won the film rights to Vance's memoir for Howard to direct. In February 2018, Taylor was hired to pen the script. In January 2019, Netflix won the rights to the film after bidding $45 million on the project. By early June, Glenn Close, Amy Adams, Gabriel Basso, Haley Bennett, Freida Pinto, and Bo Hopkins were cast. At the same time, principal photography commenced and wrapped in early August. Filming took place in Atlanta, Georgia and Middletown, Ohio under the code-name Ivan.
The film stars Close, Adams, Basso, Bennett, Pinto, and Hopkins. There's a lot of good actors in this movie, but they're given so little to do besides looking and acting like country bumpkins in hillbilly town. The two principle actresses embody their roles well but the problem is not much happens after they have been introduced as hillbillies.
Despite having a strong cast and a talented director, the film struggles to get going, and even when it eventually begins to chug along, it fails to be as exciting as it believes itself to be. Despite the best efforts of the filmmakers, the film is a few knots away from being the transformative cinema experience intended. Howard wants his film to be so much more than a mere battle between an educated man and his hillbilly family, and, at times, you can feel him getting that across. Unfortunately, the characters and sense of danger are too watered down. The film's overlapping themes and one-dimensional characters feel conspicuously flimsy, especially against the film's vivid realism and attention to graphic detail. There are moments that drag like a fouled anchor, when Howard's Hollywood sensibility gets a little schmaltzy-swelling music, philosophical points driven home with hitting-us-over-the-head-with-a-rock-like subtlety, and a bracketing story that interrupts more often than it informs. The film is an all-around disappointment. The film suffers from poor direction, an unfocused narrative, and some very underdeveloped characters. Idea-wise the film is great, but the premise is forgettable and doesn't offer much.
Simon says Hillbilly Elegy receives:

Also, see my review for Solo: A Star Wars Story.
Posted by Simon Shin at 19:00 No comments: 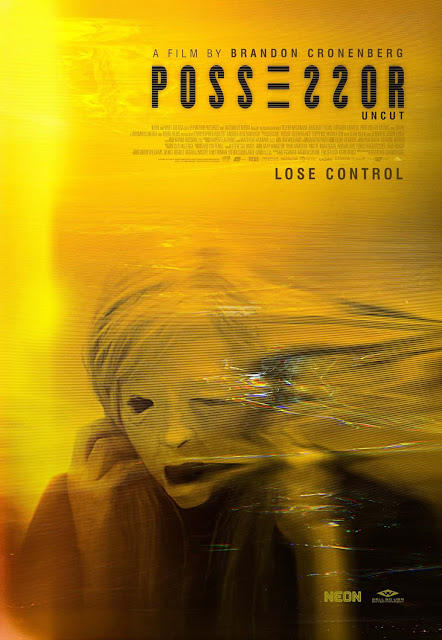 "No Body is Safe" in Possessor. This science fiction psychological horror film written and directed by Brandon Cronenberg. Elite, corporate assassin Tasya Vos uses brain-implant technology. Vos takes control of other people’s bodies to execute high profile targets. As she sinks deeper into her latest assignment Vos becomes trapped inside a mind that threatens to obliterate her.
There are two versions of the script. Cronenberg has said there is a possibility of a second movie down the line, one that would encompass the material that didn't make it into this film. Cronenberg said that José Delgado's 1970s book Physical Control of the Mind: Toward a Psychocivilized Society, his past short film Please Speak Continuously and Describe Your Experiences as They Come to You served and the films of Dario Argento, particularly Opera (1987) served as inspirations. By early April 2019, Andrea Riseborough, Christopher Abbott, Rossif Sutherland, Tuppence Middleton, Sean Bean and Jennifer Jason Leigh were cast. At the same time, principal photography commenced and filming took place in Toronto, Ontario, Canada. Most of the special effects in the film were done practically, with an effort to use as little VFX work as possible. The hallucination scenes' effects in particular were done in-camera. Cronenberg credits his effects specialists, Dan Martin and Derek Liscoumb, and his longtime cinematographer Karim Hussain for being able to pull off convincing visuals with a minimum of CGI.
The film stars Riseborough, Abbott, Sutherland, Middleton, Bean and Jason Leigh. Riseborough is an ideal Cronenberg heroine, projecting a personality that is broken, wary and capable of obsessiveness. Leigh, who in the past loved to play the absolute cynic with curled lip and gutteral voice, has never looked and sounded a doomwatcher.
Here, Cronenberg is a provocateur only to a point - boldly striding past boundaries of comfort but getting the heebie-jeebies upon approaching true profundity. But he wasn't too far from figuring out which incisions could cut the deepest. Cronenberg's most visionary and audacious film up to the time of its making, the film is a fascinating rumination on humanity, technology, entertainment, sex, and politics that is virtually incomprehensible on first viewing. Like his father, Brandon Cronenberg doesn't have the stylistic resources to match the forcefulness of his ideas, but his movies remain in the mind for the pull of their private obsessions. Everything in the film calls for the viewer seduced by the film's proposal to irretrievably surrender to its overwhelming visual personality. Never coherent and frequently pretentious, the film remains an audacious attempt to place obsessive personal images before a popular audience. Though the film finally grows grotesque and a little confused, it begins very well and sustains its cleverness for a long while. Thematically, it connects easily with most other titles in the Cronenberg oeuvre, with the added treat of having been released far ahead of its time. The film continues Cronenberg's growth out of more obvious horror realms and ups the stakes with heavier philosophical entreaties for his characters to endure.
Simon says Possessor receives:

Also, see my review for Antiviral.
Posted by Simon Shin at 21:00 No comments: