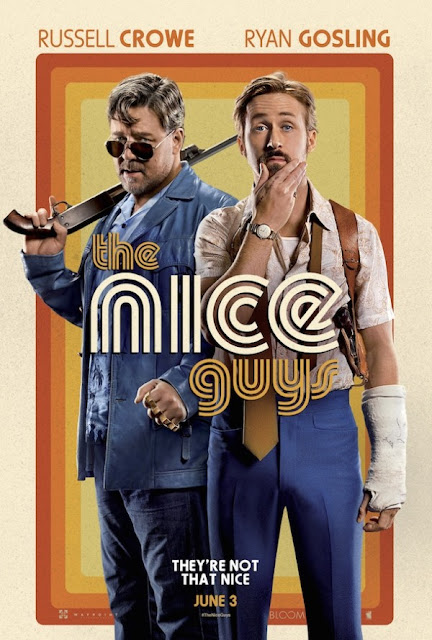 In June 2014, it was announced that Shane Black would direct a film titled The Nice Guys, with Russell Crowe and Ryan Gosling starring, Joel Silver producing and Warner Bros. distributing domestically. The project was initially proposed as a TV series but was re-tooled as a film after the pilot seemed to be going nowhere. In September, Angourie Rice, Margaret Qualley and Matt Bomer was joined the cast. In October, Beau Knapp, Keith David and Kim Basinger were added to the cast. In November, Ty Simpkins and Jack Kilmer were added to the cast. Principal photography began in October 2014, in Atlanta and Decatur, Georgia. Filming also took place in Los Angeles. Downtown Atlanta doubled for 1970's Los Angeles during filming. Prop cars were given California plates and a car was painted to resemble a 70's era L.A. cab, "Hollywood Taxi Co". Since one of the film's plot points is focused on the porn industry, references can be spotted throughout the film. One notable example is that a guest at the porno producer's party who is dressed up like Pinocchio says, "It's not my nose that grows". "It's not his nose that grows" was the tagline for a 1970's pornographic version of Pinocchio.

The film stars Russell Crowe, Ryan Gosling, Angourie Rice, Matt Bomer, Margaret Qualley, Keith David and Kim Basinger. The cast gave superb performances, especially to Crowe and Gosling. Who made a surprisingly electric and dynamic duo, reminiscent of Black's other crime duos such as Riggs and Murtaugh from the Lethal Weapon series, and Lockhart and Shrike from Kiss Kiss Bang Bang.

The Nice Guys' tongue-in-cheek satire blends well with the entertaining action and spot-on performances in this eccentric neo-noir homage. The film contains one of Gosling's most enjoyable performances, and one of Crowe's funniest. It's a relationship comedy wrapped in sharp talk and gunplay. It is a triumphant comeback for Black, after the lukewarm film that was Iron Man 3, and one of the year's best movies. It takes a bunch of genres and twists them into a blender, a pop relic that still feels current. Even though the film contains a lot of comedy and invention, it doesn't benefit much from its clever style. The plot of the film is almost willfully convoluted. But it's also largely beside the point, an excuse for quite a few good scenes, most of them equal parts homage and subversion. But the film is such a delightful bombardment, we barely notice that Black's convoluted, serpentine plot doesn't make a lick of sense. Overall, it was a sarky, sniping film noir homage that assassinates the character of every LA archetype you could imagine. It was also certainly one of the best times I've had at the movies this year. 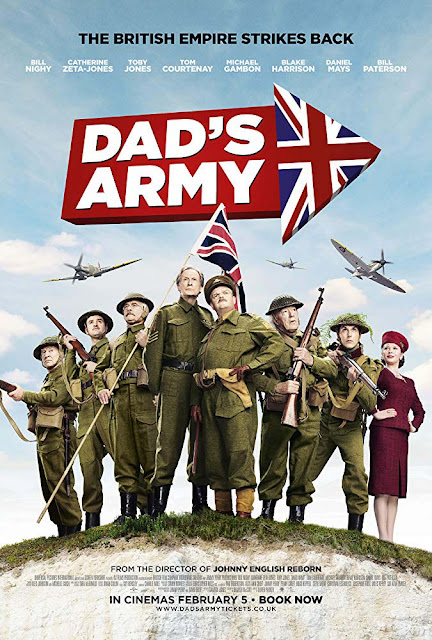 "The British Empire strikes back" in Dad's Army. This British war comedy film directed by Oliver Parker, written by Hamish McColl, and based on the BBC television sitcom of the same name. As WWII nears its climax, the dipping morale of the Home Guard is revived at the arrival of a glamorous journalist. The excitement reaches its pinnacle when they learn that there is a spy among them.

The BBC sitcom centres on the British militia called the Home Guard during the Second World War. It was written by Jimmy Perry and David Croft, and broadcast on the BBC from 1968 to 1977. The sitcom ran for nine series and 80 episodes in total; there was also a radio version based on the television scripts, a feature film and a stage show. The series regularly gained audiences of 18 million viewers, and is still repeated worldwide. The Home Guard consisted of local volunteers otherwise ineligible for military service, either because of age (hence the title Dad's Army) or by being in professions exempt from conscription. Dad's Army deals almost exclusively with men over military age, and featured older British actors, including Arthur Lowe, John Le Mesurier, Arnold Ridley and John Laurie. Younger members of the cast included Ian Lavender, Clive Dunn (who played the oldest guardsman, Lance Corporal Jones, despite being one of the youngest cast members), and James Beck (who died suddenly during production of the sixth series in 1973). Other regular cast members included Frank Williams as the vicar, and Bill Pertwee as the chief ARP warden. In 2004, it came fourth in a BBC poll to find Britain's Best Sitcom. It had been placed 13th in a list of the 100 Greatest British Television Programmes drawn up by the British Film Institute in 2000 and voted for by industry professionals. The series has influenced British popular culture, with its catchphrases and characters being well known. The Radio Times magazine listed Captain Mainwaring’s "You stupid boy!" among the 25 greatest put-downs on TV. A 2001 Channel 4 poll ranked Captain Mainwaring 21st on their list of the 100 Greatest TV Characters.

The film stars Jones, Nighy, Zeta-Jones, Courtenay, Harrison, Gambon, Paterson, Mays, Lancashire, and Gatiss. The cast revives the comic military men and women that were first introduced in the BBC series of the same namein the UK, but this thin script gives them nothing remotely to do.

Anyone with a fondness for the BBC sitcom and film that inspired this scrappy comedy will appreciate the latest mission with The Home Guard.

Also, see my review for Johnny English: Reborn.
Posted by Simon Shin at 20:00 No comments: 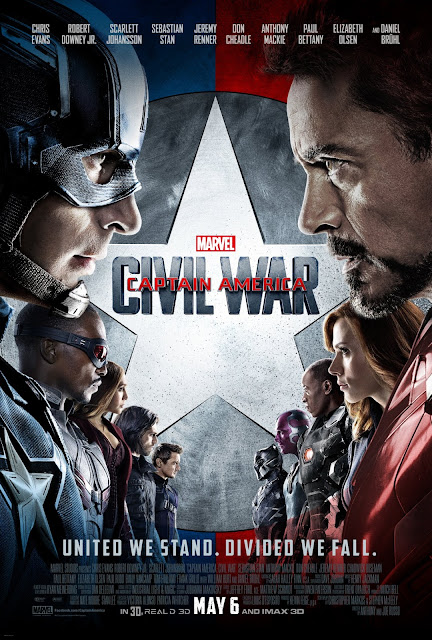 The tagline of this Marvel cinematic conflict reads "United we stand. Divided we fall", and that is what is going down in Captain America: Civil War. This superhero film directed by Anthony and Joe Russo; produced by Marvel Studios; adapted by Christopher Markus & Stephen McFeely; based on the comic book mini-series Civil War by Mark Millar. It is the sequel to 2014's Captain America: The Winter Soldier, and the thirteenth film of the Marvel Cinematic Universe (MCU). One year after the events of Avengers: Age of Ultron, many people are fearing the actions of super heroes, the government decides to push for the Anti-Hero Registration Act, a law that limits a heroes actions. This results in a division in The Avengers. Iron Man stands with this Act, claiming that their actions must be kept in check otherwise cities will continue to be destroyed, but Captain America feels that saving the world is daring enough and that they cannot rely on the government to protect the world. This escalates into an all-out war between Team Iron Man (Iron Man, Black Panther, Vision, Black Widow, War Machine, and Spiderman) and Team Captain America (Captain America, Bucky Barnes, Falcon, Sharon Carter, Scarlett Witch, Hawkeye, and Ant Man) while a new villain emerges.

The movie features an ensemble cast that includes Evans, Downey Jr., Johansson, Stan, Mackie, Cheadle, Renner, Bettany, Olsen, Rudd, VanCamp, Grillo, Hurt, Boseman, Holland, Brühl and Freeman. The cast gave spectacular performances, with the veterans giving another awesome round, and the new additions shining brightly among the veterans. Boseman as Black Panther and Holland as Spider-Man stole the show whenever they leapt on the screen. Evans and Downey gave powerful performances when at conflict at one another, making Batman and Superman's conflict look like a school playground brawl.

With the help of its impressively huge ensemble, some amazing action sequences, and even a few surprises, Captain America: Civil War is an entertaining adventure and a strong addition to the Marvel canon. However, there's something about the film that is not on par with Winter Soldier. It smothers a potentially powerful story with an overstuffed cast list, and confusing and cliched subplots.

Also, see my reviews for Captain America: The Winter Soldier and Ant-Man.
Posted by Simon Shin at 23:30 No comments: 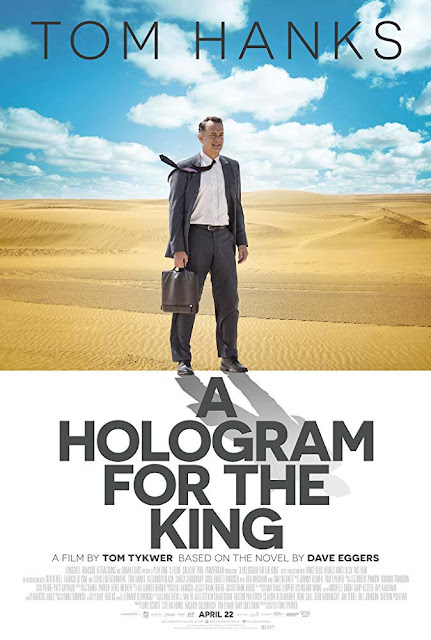 "How far will you go to find yourself?" This is A Hologram for the King. This comedy-drama film adapted and directed by Tom Tykwer, and based on the 2012 novel of the same name written by Dave Eggers. The film follows a beautiful doctor and a wise-cracking taxi driver who help an American businessman who's trying to close the deal of a lifetime in Saudi Arabia.

In mid June 2013, Tykwer was reported to be developing an adaptation of Eggers' 2012 novel with Tom Hanks to star. By early March 2014, Sarita Choudhury, Alexander Black, Tracey Fairaway, David Menkin, Ben Whishaw, and Tom Skerritt rounded out the film's cast. At the same time, principal photography commenced, and wrapped in late May. Filming took place in Morocco and Egypt, Africa, as well as Berlin and Düsseldorf, Germany.

The film stars Hanks, Choudhury, Black, Fairaway, Menkin, Whishaw, and Skerritt. It's entirely possible to enjoy the film solely for its strong performances from the cast, especially from the ever-reliable Hanks.

It's an earnest but misbegotten adaptation, which reduces a moving tour de force to a dull and homiletic house of frenetically shuffled cards. Whatever your age, even if life is an ocean made up of many drops, you may resolve that life is too short for this errant nonsense. Unfortunately, these bold ambitions come to naught. They confuse the cosmos with the costume department and wind up lost in a world of wigs and bonnets. However, it's the perfect film for all those people whose one, undying wish in life is to swim with dolphins. Yes, the film is ambitious, and impressive in some respects. But as it labours to clarify its own confusion, mapping every last nook of narrative space, any sense of real mystery is obliterated by platitudes about freedom. While the film has its flaws, there are plenty of moments where I found myself seeing the big picture and fully realizing the weight of every storyline linking to one another throughout time. Tykwer clearly aimed high, and while the final product ultimately falls short, there is still quite a bit to admire in the failure of their epic folly. I wouldn't call the film great cinema, but some of the mix and mash trumps the balderdash. For all its wisdom and intelligence however, there's a great sense that the quirks and oddities of the stories are more valuable in the book. This daring, mind-bending soul journey is a spell-binding extravaganza. This film is interesting. But it also fails. It is an evocative, imperfect beast of a movie. Adapted from Eggers' novel, the film sometimes veers into eye-rolling territory with its grand statements - but fortunately, it works more often than not. It is a shame that this adaptation could not have coherently pieced together its pocket of inherent dullness among the intermittent comedic splash-and-dash. Brilliant or pretentious - or both? An avalanche of ideas cascade relentlessly in this full throttle and stimulating film that is often frustrating, as it puts forward its proposition that we all need each other.

Simon says A Hologram for the King receives:

Also, see my review for Cloud Atlas.
Posted by Simon Shin at 17:00 No comments: