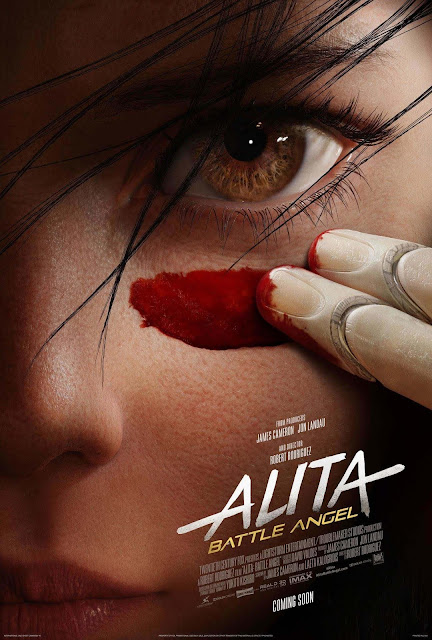 "An Angel Falls. A Warrior Rises" in Alita: Battle Angel. This cyberpunk action film directed by Robert Rodriguez, adapted by James Cameron and Laeta Kalogridis, based on the manga series Gunnm, also known as Battle Angel Alita, by Yukito Kishiro. A deactivated female cyborg is revived, but cannot remember anything of her past life and goes on a quest to find out who she is.

Kishiro's manga was originally brought to Cameron's attention by filmmaker Guillermo del Toro, and Cameron immediately became enamored with the concept. In April 2003, the project was officially announced to be Cameron's next film after Titanic (1997). Cameron confirmed in an interview that the film would be a combination of the first four books of the manga (taking the story from the first two books, and Motorball from the third and fourth books). In another interview, Cameron also said that should this film be successful, he hopes to make another two films. However, the film was repeatedly delayed due to Cameron's work on Avatar (2009) and its sequels. After years of languishing in development hell, Rodriguez was announced to helm the project in April 2016. In May, Rosa Salazar was cast in the title role, after Zendaya, Maika Monroe and Bella Thorne were considered. By mid October, Christoph Waltz, Jennifer Connelly, Mahershala Ali, Ed Skrein, Jackie Earle Haley, Keean Johnson, Eiza González, and Michelle Rodriguez rounded out the film's cast. At the same time, principal photography began, with a budget of $200 million. Filming took place in Austin, Texas and Wellington, New Zealand, utilizing the 3D Fusion Camera System, facial performance capture, and the Simulcam. In early February 2017, filming wrapped. Like Avatar, the visual effects were provided by Weta Digital, DNEG and Framestore and supervised by Joe Letteri, Eric Saindon, Nick Epstein, Raymond Chen and Nigel Denton-Howes. The film included roughly 1,500 visual effects shots, just 300 visual effects shots less than Avatar. In early December, the first trailer was released to a polarizing response, focusing on Alita's appearance, especially her big eyes.

The film stars Salazar as the title character with Waltz, Connelly, Ali, Skrein, Earle Haley, Johnson, González, and Rodriguez. The cast gave spectacular performances, especially Salazar, who made another great addition to the James Cameron hall of strong female characters. However, Alita's journey, unlike those women, is that of a born-warrior who learns to find her humanity.

When watching Alita: Battle Angel, I felt sort of the same as when I saw Avatar in 2009. The film employs a new generation of special effects, and it is not simply a sensational entertainment, it's a technical breakthrough. However, for the film to stand the test of time, what really matters is the story. And here it falls short. One can't help but feel that it's story is merely a nearly two-and-a-half hour trailer for the real story. It might be more impressive on a technical level than as a piece of storytelling, but the film reaffirms Cameron and Rodriguez's singular gift for imaginative, absorbing, and kinetic filmmaking.

Also, see my review for From Dusk Till Dawn: The Series.
Posted by Simon Shin at 14:00