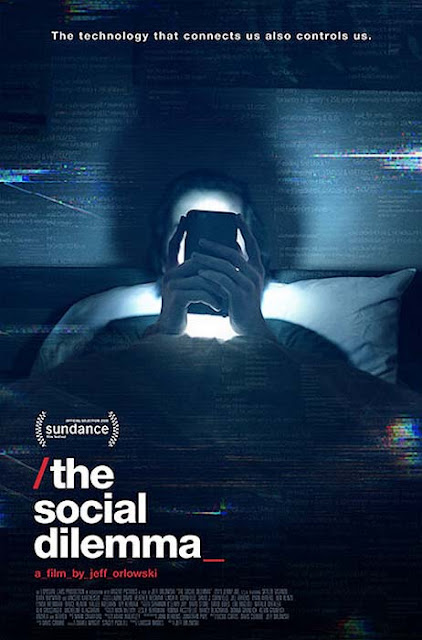 "The technology that connects also controls us." This is The Social Dilemma. This docudrama film directed by Jeff Orlowski and written by Orlowski, Davis Coombe, and Vickie Curtis. Set in the dark underbelly of Silicon Valley, this film hybrid fuses investigative documentary with enlightening narrative drama. Expert testimony from tech whistle-blowers exposes our disturbing predicament: the services Big Tech provides-search engines, networks, instant information, etc.-are merely the candy that lures us to bite. Once we're hooked and coming back for more, the real commodity they sell is their prowess to influence and manipulate us.
In addition to exploring the rise of social media and the damage it has caused to society, it focuses on its exploitation of its users for financial gain through surveillance capitalism and data mining, how its design is meant to nurture an addiction, its use in politics, its effect on mental health (including the mental health of adolescents and rising teen suicide rates), and its role in spreading conspiracy theories such as Pizzagate and aiding groups such as flat-earthers. The film features interviews with former Google design ethicist and Center for Humane Technology co-founder Tristan Harris, his fellow Center for Humane Technology co-founder Aza Raskin, Asana co-founder and Facebook like button co-creator Justin Rosenstein, Harvard University professor Shoshana Zuboff, former Pinterest president Tim Kendall, AI Now director of policy research Rashida Richardson, Yonder director of research Renee DiResta, Stanford University Addiction Medicine Fellowship program director Anna Lembke, and virtual reality pioneer Jaron Lanier.
Orlowski's suspenseful and thought-provoking documentary focuses on the ethical and existential crisis of technology. The film makes you feel vaguely sick, especially when it explains how the destruction of moral ethics could lead to the existential destruction of humanity. A story of passionate pioneers and experts who are concerned about technology's moral ambiguity becomes a clarion call for change and one of the year's most essential movies. The film is a remarkable experience, one that teeters between overwhelming the viewer with the scope of humanity's ruin and inspiring them to find ways to help. I strongly recommend watching the film, after which I urge you to please reconsider your social media accounts. Because seriously, folks, you will never see them in the same way again. The urgency of this problem requires people to become informed about the issues, starting with seeing the film either at the IFC or on Netflix. This cautionary tale is far more grand than social media, and once we realize as much, perhaps we can reverse the consequences before it is too late. By film's end, you'll not only see your social media differently but also as nightmares in which they will be no escape if you allow it to control you. The film makes a powerful case less through argument than by using cinema's most basic tool: visual proof. The message will stay with you, but so will the nagging sense that you can't really do anything unless you happen to be a world leader.
Simon says The Social Dilemma receives:

Also, see my review for Chasing Coral.
Posted by Simon Shin at 20:00