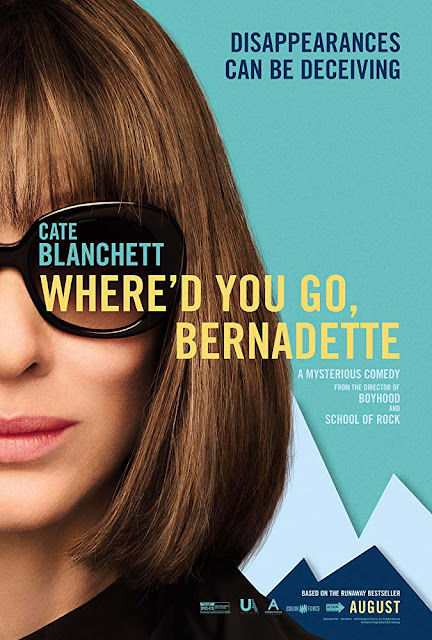 "Bernadette Fox has it all. A loving husband, and a brilliant daughter. But the one thing missing, is her." This is Where'd You Go, Bernadette. This mystery comedy-drama film directed by Richard Linklater, adapted by Linklater, Holly Gent, and Vince Palmo, and based on the novel of the same name by Maria Semple. Based on the runaway bestseller, this inspiring comedy centres on Bernadette Fox, a loving mom who becomes compelled to reconnect with her creative passions after years of sacrificing herself for her family. Bernadette's leap of faith takes her on an epic adventure that jump-starts her life and leads to her triumphant rediscovery.

In January 2013, Annapurna Pictures and Color Force acquired the film rights to Semple's novel, with Scott Neustadter and Michael H. Weber to pen the adaptation. In February 2015, Linklater was announced to direct the adaptation. Linklater was attracted to the story because of the strong mother/daughter relationship, he being the father of three daughters and brother of two older sisters. In April 2016, It was announced that Linklater, Holly Palmo and Vince Palmo had taken over writing duties from Neustadter and Weber. By early July 2017, Billy Crudup, Emma Nelson, Kristen Wiig, Judy Greer, Laurence Fishburne, James Urbaniak, Troian Bellisario, Steve Zahn, and Megan Mullally. At the same time, principal photography commenced, and took place in Pittsburgh, Pennsylvania; Seattle, Washington; British Columbia, Canada; and Greenland. While on location in Greenland, the production was hampered by a hurricane that lasted for thirty-six hours. Rather than wait it out, the crew went ahead and filmed the hurricane and included it in the final cut.

The film stars Blanchett, Crudup, Nelson, Wiig, Greer, Fishburne, Urbaniak, Bellisario, Zahn, and Mullally. It's a spell-binding display of wonderful acting with what looks like occasional skilled improvisation. Linklater allows Blanchett and the cast to give performances of a richness and depth that you won't find in their more obviously crowd-pleasing movies.

Where'd You Go, Bernadette balances raw drama against refreshing moments of humor in an impeccably cast film that wrestles with questions of patriotism, family, and grief. It's good fun and has a warm heart, but there's nothing of real substance on offer in the film. Blanchett is still immensely watchable, however, in one of his best film roles to date. Linklater can't protect them from all the script's potholes, including sentiment, contrivance and a galling mixed-message ending. But spending time in the company of Blanchett and cast? That truly is a pleasure. It is an uneven film, that succeeds best when it focuses on the spiritual journey of its protagonist. The film may feel like it is meandering at times, but once it gets to its destination it leaves you with a powerful final punch. The film may not be completely smart and challenging, but it contains great performances and writing that may tug hard at the heart. It's gently and marvellously unpacked for our viewing pleasure. It's as funny as it is moving.

Also, see my review for Last Flag Flying.
Posted by Simon Shin at 16:00