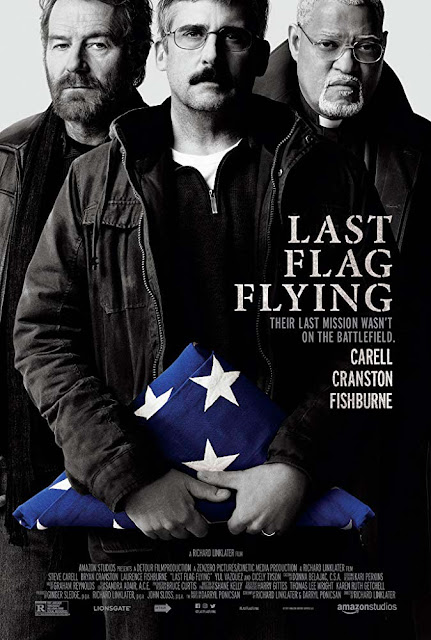 "Their Last Mission Wasn't On The Battlefield" in Last Flag Flying. This drama film directed by Richard Linklater, adapted by Linklater and Darryl Ponicsan, and based upon the Ponicsan's 2005 novel of the same name. Thirty years after serving together in the Vietnam War, Larry "Doc" Shepherd, Sal Nealon and the Rev. Richard Mueller reunite for a different type of mission: to bury Doc's son, a young Marine killed in Iraq. Forgoing burial at Arlington National Cemetery, Doc and his old buddies take the casket on a bittersweet trip up the coast to New Hampshire. Along the way, the three men find themselves reminiscing and coming to terms with the shared memories of a war that continues to shape their lives.

In August 2016, it was announced that Amazon Studios would produce and distribute a cinematic adaptation of Ponicsan's novel with Linklater as director and adapted by Linklater and Ponicsan. Ponicsan's novel is a sequel to his 1970 novel The Last Detail, which covered the same characters earlier in their lives. However, Linklater, stated that the film is not a sequel to Hal Ashby's The Last Detail. Linklater first attempted to adapt Ponicsan's novel in 2006, but held off claiming "the timing wasn't right." By November, Steve Carell, Bryan Cranston, and Laurence Fishburne were cast. Carell consulted with his father, a WWII veteran, to prepare for his role. Cranston was initially reluctant to accept the role of Sal, since his busy schedule had him juggling a TV series, multiple movies, a Broadway play, and a book tour. He was persuaded to take the part after being impressed by the story and the caliber of the cast. Sal was originally written as an Italian-American with a heavy Queens accent. Cranston suggested, with Linklater's blessing, to perform the character as half-Irish. Fishburne was the only actor Linklater had in mind for the role of Mueller. Linklater wanted actors who could not only handle the film's dramatic elements but also that could add a humorous touch for the more light-hearted moments. At the same time, principal photography commenced, and lasted for thirty-two days, Filming took place in Pittsburgh, Pennsylvania and Cold Spring, New York. Cinematographer Shane Kelly filmed the movie using a Panasonic VeriCam. He worked with Linklater to give bleaker and more somber tone compared to their previous collaborations with a darker hue and muted colors.

The film stars Carell, Cranston, and Fishburne. The trio's performances are enjoyable, but it never quite feels like the old trio from The Last Detail. Yet they are admirably dense in a manner that's satisfying rather than frustrating.

Of course it's no The Last Detail, but it is satisfyingly moody and atmospheric. The film feels a lot like a retread of the 1973 classic, only without the style and panache that Ashby brought to the table. The film may lack the subtlety and richness of Linklater's best work, but it remains an incredibly exhilarating film that will leave you with warm feelings of nostalgia.

Also, see my review for Everybody Wants Some!!.
Posted by Simon Shin at 11:00