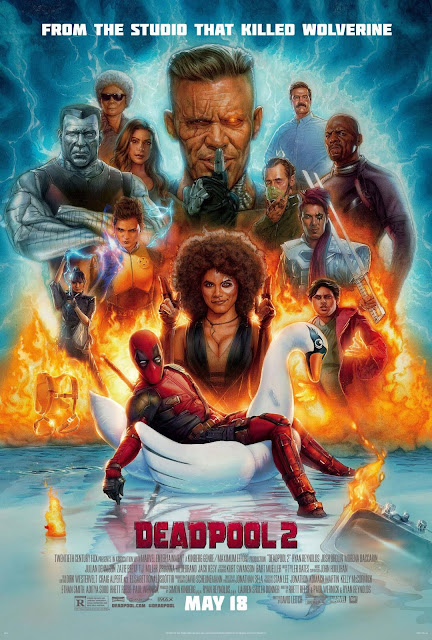 "He's not coming alone" in Deadpool 2. This superhero film directed by David Leitch, written by Rhett Reese, Paul Wernick, and Ryan Reynolds, based on the Marvel Comics character of the same name. It is the eleventh installment in the X-Men film series, and a direct sequel to Deadpool (2016). After surviving a near fatal bovine attack, a disfigured cafeteria chef (Wade Wilson) struggles to fulfill his dream of becoming Mayberry's hottest bartender while also learning to cope with his lost sense of taste. Searching to regain his spice for life, as well as a flux capacitor, Wade must battle ninjas, the Yakuza, and a pack of sexually aggressive canines, as he journeys around the world to discover the importance of family, friendship, and flavor - finding a new taste for adventure and earning the coveted coffee mug title of World's Best Lover.

Plans for a sequel was announced 3 days before the film's release, and were confirmed in February 2016.  The original team of Reynolds, Reese, Wernick, and director Tim Miller were set to return for the sequel. However, in October 2016, Miller left the project due to creative differences with Reynolds. Miller later stated that he left the sequel because he "didn't want to make some stylized movie that was 3 times the budget", and wished to create the same kind of film that made the first one a success. After Miller's departure, Rupert Sanders, Drew Goddard, Magnus Martens, and Leitch were considered by the studio to replace Miller. Ultimately, Leitch was chosen to direct. In the same month, Mary Elizabeth Winstead, Lizzy Caplan, Kerry Washington, Sienna Miller, Ruby Rose, Mackenzie Davis, Kelly Rohrbach, Eve Hewson, Sofia Boutella, Stephanie Sigman, Sylvia Hoeks, and Janelle Monáe were considered for the role of Domino. Zazie Beetz was ultimately cast, which was met with backlash from fans. In March 2017, an extensive casting search took place for the role of Cable that included Dolph Lundgren, Mel Gibson, Kurt Russell, Bruce Willis, Alec Baldwin, Sylvester Stallone, Arnold Schwarzenegger, Stephen Lang, Ron Perlman, Pierce Brosnan, David Harbour, and Josh Brolin. Brolin was ultimately cast. Filming began in May and concluded in October, in Vancouver, British Columbia, Canada. The production wrapped on the same day that X-Men: Dark Phoenix (2019) wrapped it's production. Originally scheduled to be released on June 1 2018, the release date was pushed forward to May 18 2018.

The film stars Reynolds in the title role, alongside Brolin, Beetz, Morena Baccarin, Julian Dennison, T.J. Miller, Brianna Hildebrand, and Jack Kesy. The original cast gave another round of solidly entertaining performances that expands upon the first film, with Reynolds' being the strongest, comical, and surprisingly emotional. The new cast members are a welcome addition who injected new flavour into the already colourful ensemble.

Although the film itself succumbs to overly-outrageous cartoonish antics, Deadpool 2 is one superhero movie that manages to stay true to the original while expanding its universe. It features some larger-than-life action sequences, absurdly comical references and jokes, and new colourful characters.

Also, see my reviews for Deadpool and Logan.
Posted by Simon Shin at 13:00