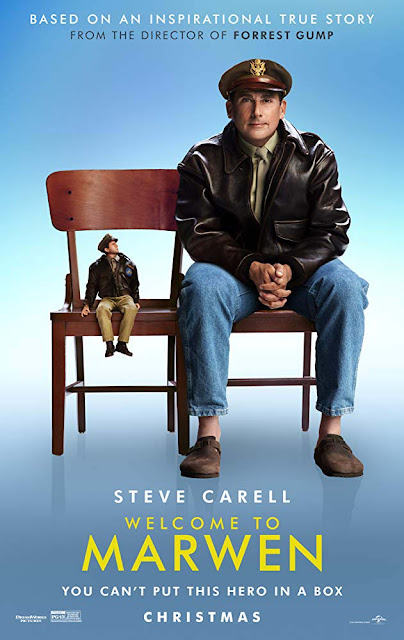 "The director of Forrest Gump invites you to a most unexpected place" with Welcome to Marwen. This drama film directed by Robert Zemeckis, written by Zemeckis and Caroline Thompson, inspired by Jeff Malmberg's 2010 documentary Marwencol. When a devastating attack shatters Mark Hogancamp and wipes away all memories, no one expected recovery. Putting together pieces from his old and new life, Mark meticulously creates a wondrous town where he can heal and be heroic. As he builds an astonishing art installation - a testament to the most powerful women he knows - through his fantasy world, he draws strength to triumph in the real one.

In late April 2017, it was announced that Robert Zemeckis would next direct a fantasy drama film entitled The Women of Marwen that would star Steve Carell. By late August, Leslie Mann, Janelle Monáe, Eiza González, Diane Kruger, Gwendoline Christie, Merritt Wever, and Leslie Zemeckis had rounded the film's cast. In mid August, with a budget of $40 million, principal photography on the film began, and wrapped in mid October. Filming took place in Vancouver, British Columbia, Canada. Like Zemeckis' previous efforts, The Polar Express (2004), Beowulf (2007), and A Christmas Carol (2009), The film utilized motion capture techniques. The dolls were portrayed via motion capture by their respective actors and actresses. In June 2018, the film was officially titled Welcome to Marwen. The real-life doll village is actually named Marwencol, a combination of Mark, Wendy, and Colleen. The real Colleen became the character Nicol, so the "col" was dropped from the name.

The film stars Carell, Mann, Kruger, Wever, Monáe, González, Christie, and Zemeckis. Despite excellent performances from the cast, they ultimately serviced a film that lacked substance and real character depth.

The gimmick behind Welcome to Marwen is the fact that you actually see the world created by Hogancamp; the brilliance of the film is that you experience it. The technical ability with which the experienced Zemeckis shows off is positively dazzling. However, what might have looked like a great idea on paper has been tackled by filmmakers who haven’t expanded it much beyond the one gimmick inherent in the premise. The film's early development is too slow and the humour initially too broad. But it develops into a lively entertainment with its visually impressive world of Marwen. The film's biggest problem, the fact that Marwen is shown too much, is turned into its greatest failure through Zemeckis' creativity. Its humour and technically impressive visuals don't break any new ground. The film rushes so desperately from one joke to the next that it never has more to offer than occasional moments of somewhat underwhelming charm. Zemeckis still has undeniable energy, vigour and flair, but it's being misspent on pretexts and situations that seem inexcusably gratuitous and snide with insufficient control and discipline. The film is filled with too many ideas, relationships, and situations with plot overkill. It attempts a tricky balancing act between thrilling visuals and fact-based drama – and like its protagonist, pulls it off with disjointed élan.

Also, see my review for Allied.
Posted by Simon Shin at 17:00