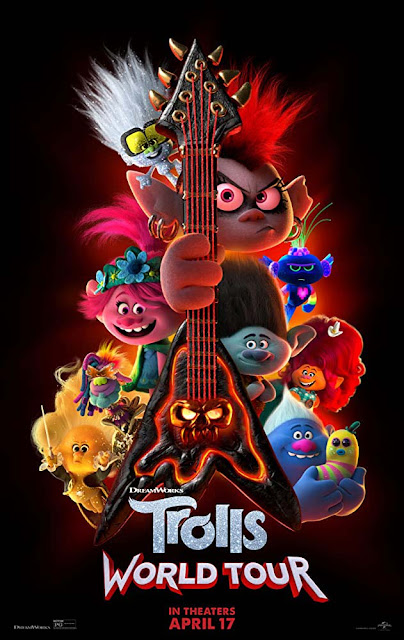 From the creators of Trolls comes Trolls World Tour. This computer-animated fantasy musical film co-directed by Walt Dohrn and David P. Smith, written by Jonathan Aibel, Glenn Berger, Elizabeth Tippet, Maya Forbes and Wallace Wolodarsky, and produced by DreamWorks Animation. It is a sequel to the 2016 film Trolls. Poppy and Branch discover that there are six different troll tribes scattered over six different lands. Each tribe is also devoted to six different kinds of music -- funk, country, techno, classical, pop and rock. When rockers Queen Barb and King Thrash set out to destroy the other music, Poppy and Branch embark on a daring mission to unite the trolls and save the diverse melodies from becoming extinct.

In late February 2017, Universal Pictures and DreamWorks Animation announced the sequel, with Anna Kendrick and Justin Timberlake reprising their roles. James Corden, Ron Funches, Icona Pop, Kunal Nayyar, Zooey Deschanel, and Christopher Mintz-Plasse also returned to reprise their roles. Rachel Bloom, Karan Soni, Sam Rockwell, Jamie Dornan, Kenan Thompson, Kevin Michael Richardson, Ozzy Osbourne, Kelly Clarkson, Chance the Rapper, Anthony Ramos, Flula Borg, J Balvin, Mary J. Blige, George Clinton, Ester Dean, Gustavo Dudamel, the McElroy brothers, and Red Velvet rounded out the voice cast. In mid June, the film's title was revealed as Trolls World Tour. Universal Pictures originally planned the film for a April 10, 2020 theatrical release date. However, it was later pushed up to February 14 before being moved to April 17. It was once again pushed up to its first release date, but in mid March, due to the COVID-19 pandemic, Universal announced that the film would be released simultaneously in theaters and for rental on digital platforms. In response to Universal releasing the film without consulting theater owners, as well as comments from NBCUniversal CEO Jeff Shell suggesting that future Universal releases would premiere simultaneously in theaters, AMC Theatres stated that they would not license films that also premiere at the same time on digital release; "[AMC] will not license any Universal movies... on these terms." Regal Cinemas followed suit in a statement not just directed at Universal, saying they will "not be showing movies that fail to respect the [theatrical] windows".

Trolls World Tour is gloriously colourful, simultaneously silly yet often deceptively clever, and actually rather enchanting. However, the music in the film is programmed by your local karaoke bar and sung like everyone's getting paid REALLY WELL. Additionally, I didn't like it, not at all, and while I'm certain there are kids out there who will undoubtedly feel differently don't expect me to sing a different tune on the matter anytime soon. This inoffensive, highly formulaic affair differs only from other average 'toons in that it merrily pours on the audiovisual sugar to overload proportions.

Also, see my review for Trolls and Abominable.
Posted by Simon Shin at 18:00