Film Review: "Birds of Prey (and the Fantabulous Emancipation of One Harley Quinn)" (2020). 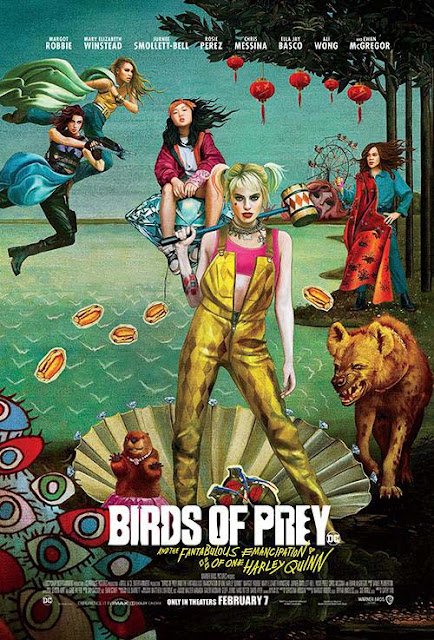 "Gotham's worst brings out their best. Meet Harley Quinn, Black Canary, Huntress, Renee Montoya, and Cassandra Cain." This is Birds of Prey (and the Fantabulous Emancipation of One Harley Quinn). This superhero film directed by Cathy Yan, written by Christina Hodson, and based on the DC Comics team Birds of Prey. It is the eighth installment in the DC Extended Universe (DCEU). It's open season on Harley Quinn when her explosive breakup with the Joker puts a big fat target on her back. Unprotected and on the run, Quinn faces the wrath of narcissistic crime boss Black Mask, and every other thug in the city. But things soon even out for Harley when she becomes unexpected allies with three deadly women.

In 2015, during the production of Suicide Squad, Robbie pitched the idea of the film to Warner Bros. While Warner Bros. and DC Films had various other Harley Quinn-oriented films in development, Birds of Prey was the only one in which Robbie was directly involved with its development. In May 2016, Warner Bros. announced a spinoff film focusing on Harley Quinn and several other female DC Comics heroes and villains. Robbie was attached to reprise her role, and would also serve as producer. In November, Hodson was announced to be penning the script. In April 2018, Warner Bros. and DC Films hired Yan to direct. In July 2018, the film entered pre-production, and Robbie confirmed the film would be titled Birds of Prey. In addition, the line-up for the Birds of Prey team was revealed to include Black Canary, Huntress, Cassandra Cain, and Renee Montoya. In August, casting began with Warner Bros. considering a number of actresses to be cast, and Roman Sionis / Black Mask was revealed to be the film's antagonist. In late September, Warner Bros. set a February 7, 2020 release date. In October, during the U.S.-China Entertainment Summit, Yan confirmed that the film would be R-rated, and announced the cast with Mary Elizabeth Winstead as Helena Bertinelli / Huntress, Jurnee Smollett-Bell as Dinah Lance / Black Canary, Rosie Perez as Renee Montoya, Ewan McGregor as Roman Sionis / Black Mask, Chris Messina as Victor Zsasz Ella Jay Basco as Cassandra Cain, and Ali Wong as Ellen Yee. In November, Robbie revealed that the full title would be Birds of Prey (and the Fantabulous Emancipation of One Harley Quinn). In January 2019, principal photography commenced, and wrapped in mid April. Filming took place throughout Los Angeles, California, and at the Warner Bros. Studios under the working title Fox Force Five. In September 2019, Daniel Pemberton was announced to compose the film's score.

Its female characters are up against a rather conventional villain, yet they managed to build up enough good will thanks to their standout performances. The female DC characters have been unleashed upon the world, with their very own movie, and they made it quite a lot of fun.

Birds of Prey plays like a graphic novel brought to life. It's a fun action romp with some great turns from a bunch of actors who are clearly having a blast.

Simon says Birds of Prey (and the Fantabulous Emancipation of One Harley Quinn) receives: