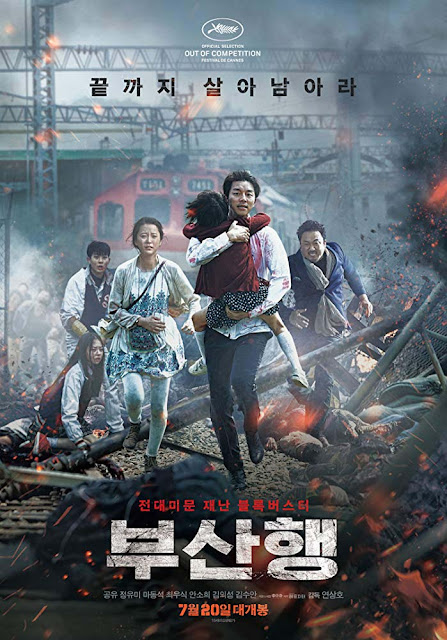 "Life-or-death survival begins" in Train to Busan (부산행). This South Korean zombie film directed by Yeon Sang-ho, and written by Park Joo-suk. The film follows a group of terrified passengers fighting their way through a countrywide viral outbreak while trapped on a suspicion-filled, blood-drenched bullet train ride to Busan, a southern resort city that has managed to hold off the zombie hordes... or so everyone hopes.

The film stars Gong Yoo, Kim Su-an, Jung Yu-mi, Ma Dong-seok, Choi Woo-shik, Sohee, and Kim Eui-sung. Thanks to the cast, the film succeeds on its unfriendly characters, sustained discomfort and, above all, an unforgiving diagnosis of the moral misery of a society that perhaps was already living its well-deserved Apocalypse inside. The film is a superb piece of work which blurs lines between Them and Us in complex ways, breathing new life into the undead in the process. It deserves a wide audience.

While not exactly as intriguing and powerful as his previous films, the film still offers visuals and a narrative in perpetual, gripping motion. The film leaves us with a solid but less compelling work in his growing filmography that satisfies neither as art or entertainment. The film infuses new life into the worn out zombie movie genre with blood-pumping thrills and an incisive Korean point of view which separates it from the crowd. Yeon Sang-ho's third feature is no less fierce and violent as his The King of Pigs and The Fake, and wholeheartedly artistic at the same time. Yeong Sang-ho directs a film where the key word (apart from zombies ) is cruelty, as is the main sentiment that permeates the animation. Through its multileveled, filled with social comments presentation, he manages to present a unique entry in the genre. Closer to suspense than to terror offering a meritorious outcome that delves deeper into moral ambiguity and portrays a crude social retrospective of class division. At times it is oppressively morose, but it has a nice dusting of social realism to go with the violence, and reaches an agreeably nasty conclusion. A more than decent film that knows how to support itself in this kind of topics to come up with a solid story. Although the technical quality doesn't reach the precision of Hollywood, it's a completely enjoyable audiovisual piece. Like all the best horror films, the grisly events unfolding onscreen are merely a cypher through which the filmmaker can address prominent social issues. The film's social advocacy and regional specificity, as well as its effective staging, make it a worthy entry into the zombie canon. The film delves into the darkened recesses of human nature, unflinchingly laying bare the results of our basest instincts.