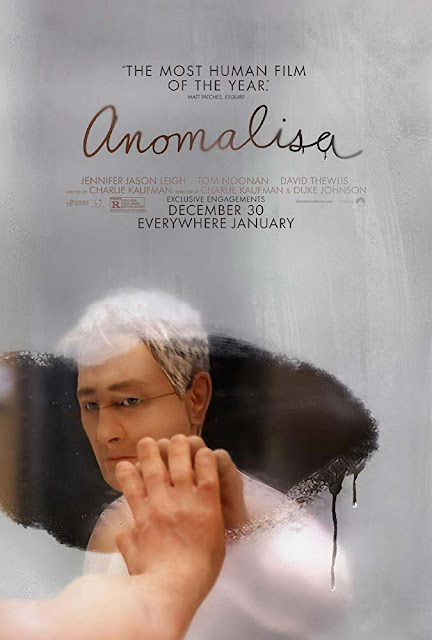 "Welcome to the Kaufman surreal-neorealism tale in a dull world of sameness." This is Anomalisa. This stop-motion animated comedy-drama film written and directed by Charlie Kaufman. The film follows Michael Stone, a man living a dull life, who is tired of his monotonous routine. However, things change when he meets a stranger on a business trip.

In 2005, the film was written for the Los Angeles run of Theatre of the New Ear, described as "a concert for music and text, or a set of 'sound plays'" by Carter Burwell, who commissioned and scored them. It was a double bill with Kaufman's Hope Leaves the Theater, and replaced Sawbones, by the Coen Brothers, from the earlier New York run after that play's actors were unavailable. Anomalisa was credited to the pen name Francis Fregoli: a reference to the Fregoli delusion, a belief that different people are in fact a single person who changes appearance or is in disguise. The 2005 performance had Thewlis and Leigh sitting on opposite sides of the stage, with Noonan in the middle; Burwell conducted the Parabola Ensemble, and there was a foley artist. Kaufman was initially opposed to turning the play into an animated film. The film raised its budget on Kickstarter so as to "produce this unique and beautiful film outside of the typical Hollywood studio system where we believe that you, the audience, would never be allowed to enjoy this brilliant work the way it was originally conceived". Pitched as a short film "approximately 40 minutes in length", 5,770 backers pledged $406,237 to help bring the project to life. After the success of the Kickstarter initiative, additional funding was secured by the film's production company, Starburns Industries, and the film was expanded to feature length. The puppets were created with 3D printers, with multiple copies of each character. Eighteen Michaels and six Lisas were created. Johnson was told that such realistic animation would be "disturbing and off-putting", but disagreed. Kaufman and Johnson have described the process of stop-motion animation as "laborious" and found challenges in making the puppets look lifelike and relatable. Animator Dan Driscoll said they found people on whom to model the puppets, studied human movement and facial expressions to produce a precise result, created the puppets and built the sets, and finally placed the puppets on the sets and moved them frame by frame to create the illusion of movement. Kaufman said the medium of stop-motion underpins the narrative of Anomalisa by drawing attention to small details viewers would not notice in a live-action film. The film was in production for more than two years.


The film features the voice talents of David Thewlis, Jennifer Jason Leigh, and Tom Noonan. Kaufman and the cast have succeeded in portraying an unflinchingly honest and deep examination of the soul of a person without jumping through traditional hoops of this happened here, this happened next.'

With Anomalisa, Kaufman has most certainly turned in one of the most beautifully realised, exquisitely made films of the year. Simply put, it's astonishing.