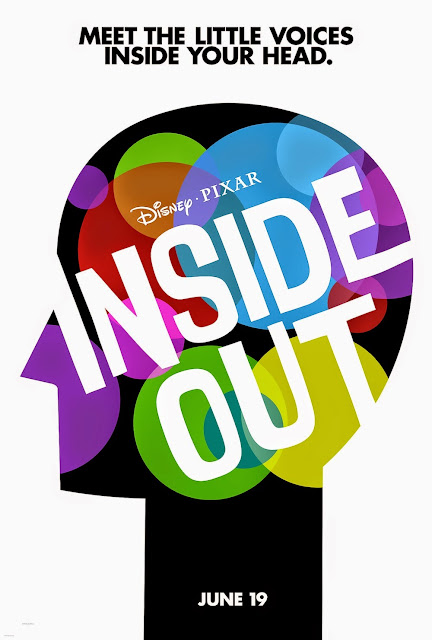 One of the taglines reads "Meet the little voices inside your head", which is what Inside Out brings. This 3D computer-animated comedy-drama film produced by Pixar Animation Studios and directed by Pete Docter. The film is set in the mind of a young girl, Riley, after she is uprooted with her parents from her Midwest life and moved to San Francisco, her five personified emotions - Joy, Fear, Anger, Disgust and Sadness - try to lead her through life as she is in conflict on how best to navigate a new city, house and school.


The origins of Inside Out began in late 2009, when Docter began to notice his pre-teen daughter, Elie, exhibiting shyness. He then began to imagine what happens in the human mind when emotions set in. The idea to depict it through animation excited Docter, who felt it the ideal form to portray "strong, opinionated, caricatured personalities." He began researching information about the mind, alongside producer Jonas Rivera and co-director Ronnie del Carmen. They consulted Paul Ekman, a well-known psychologist who studies emotions, and Dacher Keltner, a professor of psychology at the University of California, Berkeley. Ekman had early in his career identified six core emotions—anger, fear, sadness, disgust, joy, and surprise. Docter found surprise and fear to be too similar, which left him with five emotions to build characters around. Keltner focused on sadness being an emotion that strengthens relationships. After the smash success of Docter's 2009 film Up encouraged those at Pixar to allow Docter to create another film with a more sophisticated story. Inside Out is the first Pixar film to lack the input from co-founder and former Apple CEO Steve Jobs, who died in 2011, and John Lasseter, who was more focused on restructuring Walt Disney Animation Studios in Los Angeles at the time of its production. Executives at Disney and Pixar were positive at the proposal of making Inside Out, but acknowledged it would be difficult to market.

The features the voice talents of Amy Poehler as Joy, Phyllis Smith as Sadness, Bill Hader as Fear, Lewis Black as Anger, Mindy Kaling as Disgust, Kaitlyn Dias as Riley, Diane Lane as Riley's mom, Kyle MacLachlan as Riley's dad and Richard Kind as Bing Bong. The cast gave brilliant performances as well as exude emotional depth through every scene and warm humanness.


Another worthy work of art from Pixar, Inside Out is an exciting, hilarious, and heartfelt adventure impeccably crafted and told with wit and depth. Winsome, touching and arguably the funniest Pixar effort ever, this gorgeously rendered, high-flying adventure is a tidy 90-minute distillation of all the signature touches that came before it. The film is an exceptionally refined picture; unlike so many animated films, it's not all about sensory bombardment and volume. The vocal performances exude a warm enthusiasm, and tech specifications could not be better. It is the kind of movie that leaves you asking 'How do people come up with this stuff?' despite being predictable at times.

Simon says Inside Out receives:

Also, see my review for Monsters University.
Posted by Simon Shin at 14:00