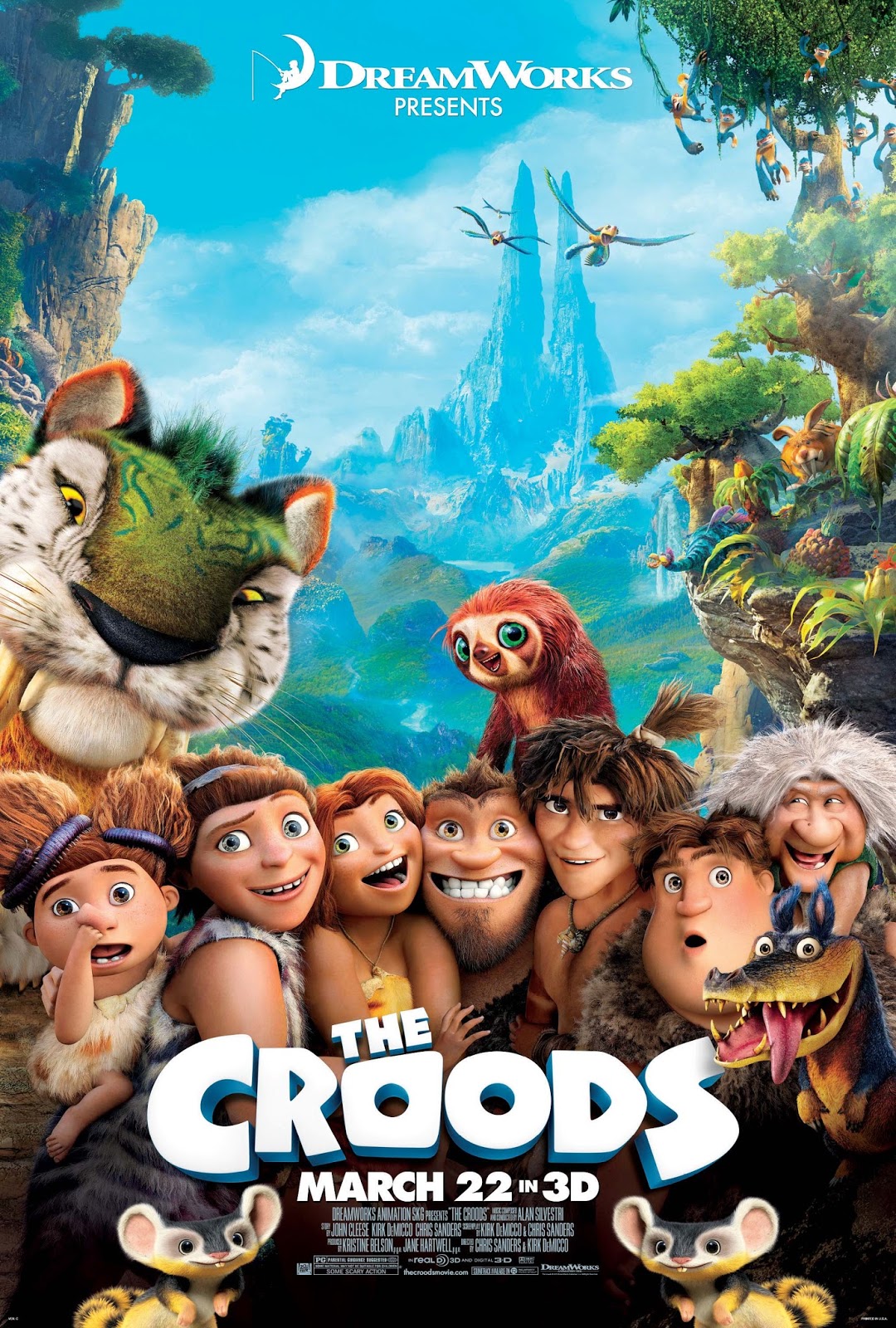 "With every sun comes a new day. A new beginning. A hope that things will be better today than they were yesterday. But not for me. My name is Eep. And this is my family, the Croods. If you weren't clued in already by the animal skins and sloping foreheads, we're cavemen. Most days we spend in our cave, in the dark. Night after night, day after day. Yep, home sweet home. When we did go out, we struggled to find food in a harsh and hostile world… Anything new is bad. Curiosity is bad. Going out at night is bad. Basically, anything fun is bad. Welcome to my world! But this is a story about how all that changed in an instant. Because what we didn't know was that our world was about to come to an end. And there were no rules on our cave walls to prepare us for that." Which is what you’ll expect when watching The Croods. This 3D computer-animated adventure prehistoric comedy film produced by DreamWorks Animation. The film is a set in a prehistoric era known as The Croodaceous, a period which contains fantastical creatures. The film follows the world's first family as they embark on a journey of a lifetime, with the arrival of a prehistoric genius who comes up with revolutionary new inventions (like fire), when the cave that has always shielded them from danger is destroyed. Traveling across a spectacular landscape, the Croods discover an incredible, dangerous but exotic new world filled with fantastic creatures in search of a new home and their outlook is changed forever.

It features the voices of Nicolas Cage, Emma Stone, Ryan Reynolds, Catherine Keener, Clark Duke, and Cloris Leachman. Cage gave a humorous and emotionally driven performance as Grug Crood, a caveman who is the well-meaning, overprotective but old-fashioned patriarch of the Croods family. Stone gave a witty and empathetic performance as Eep Crood, a cavegirl who is Grug and Ugga's eldest daughter and is filled with curiosity and a desire for adventure. She and Reynolds had a great and quirky chemistry as he played Guy, a nomadic caveboy who is not as strong as the Croods, but prefers using his brain and comes up with various ideas and inventions. His performance was also witty and empathetic. Keener gave an emotional performance as Ugga Crood, Grug's wife and the more open-minded mother than Grug. Duke gave a comical performance as Thunk Crood, the dim-witted, uncoordinated but sweet caveboy who is Grug and Ugga's son. Finally, Leachman also gave a humorous performance as Gran, a very old and ferocious cavewoman who is the mother-in-law of Grug and the mother of Ugga.

The Croods is one of the most charming feature-length cartoons of recent years -- funny, sassy, startling and original. A refreshingly high-tech cartoon. A raucous comedy/adventure and easily one of the strangest products to ever emerge from the DreamWorks Animation pipeline. It's not in the same league with the likes of Kung Fu Panda or How to Train Your Dragon, but it's much better than, say, 2010’s Shrek Forever After.